How Many Players Are On A Volleyball Team? It’s More Than You Think! 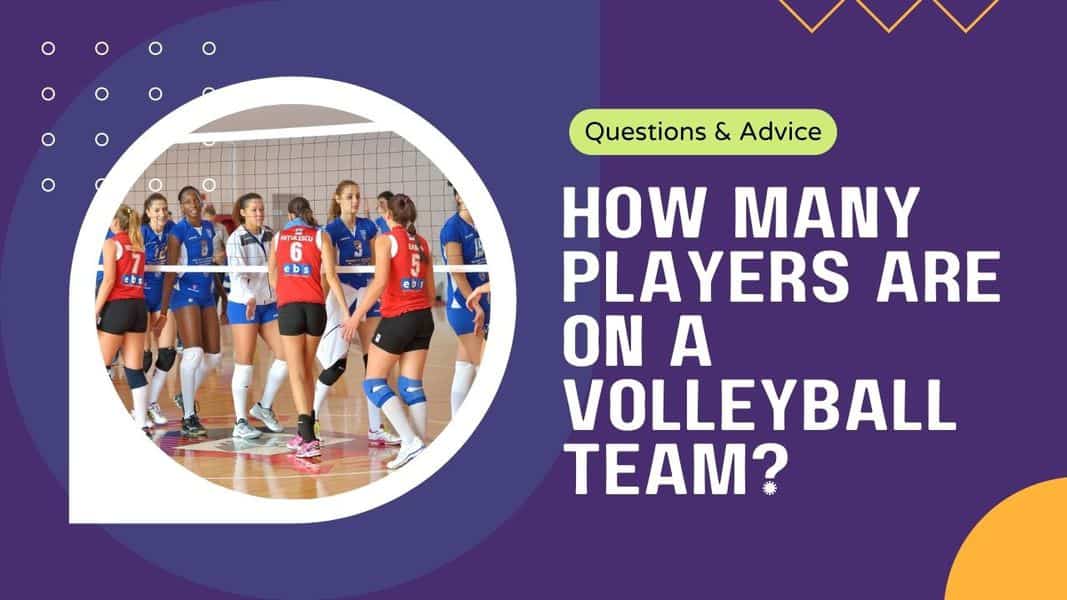 How many players belong to a volleyball team may not be immediately obvious, especially with players frequently transitioning in and out of the game.

There are 6 players on each side of the court at any one time, with each team allowed up to 6 substitute players, for a total of 12 players per team in an indoor volleyball match.

At the highest levels, you’ll often see more than 12 players lining up for a team before a game begins.

Squads often run even deeper than this.

In this article I’ll explain exactly how these numbers work.

How Many Volleyball Players On Court At Once?

There is 6 players on each side of the court at once. That’s 12 total.

If you somehow manage to get 7 on the court, the ref will call a violation.

Liberos and substitutes may move in and out of the game frequently, but they’re always replacing a player on court, so there’s never more than 6 players.

Can A Volleyball Team Play With Less Than 6 Players?

Yes! Although it doesn’t really ever happen in any serious game.

A team must play with at least 4 players, otherwise the game will be forfeited.

It’s not uncommon to occasionally see a 5 man team in rec leagues or social games who were unable to field a 6th player and couldn’t find someone to fill in.

If your team is talented, you might stand a chance with just 5 players on court, but as soon as you get down to 4 players, it becomes virtually impossible to win with so many empty positions.

How Many Players On A Volleyball Team Including Substitutes?

While these numbers aren’t exactly written in stone, only very occasionally will these figures vary from league to league.

With 6 players on court, teams are also allowed 6 substitutes starting on the bench, for a total of 12 players per side.

This is was one of our Australian youth team lineups as we played in a championship game in Thailand.

These 12 players are written into the score sheet before the game and those are the only players allowed to participate.

Can You Bring More Than 12 Players To A Game?

Yes, and this does happen quite often at the highest level of the game.

For elite volleyball, and I’m talking mainly international tournaments, you’ll see 13, 14, or even 15 players lined up before the game.

Of course, since only 12 players can enter the game, any extra players are there for moral support only and can’t participate even in the case of injuries.

How Many Players On A Volleyball Roster?

This one is largely dependent on the level of competition we’re talking about here.

A typical high school volleyball team will usually field 10-12 players, occasionally up to 14.

This will vary based on the level of competition.

If I recall correctly, my high school team (in Australia) only had 10 players on it, which was plenty.

That said, there’s no rules against having more. Some teams have been 20 players deep in the past.

This one will depend a little on where the league is and what level of competition we’re talking about.

Generally speaking roster size will be between 16-20, similar to the College level.

At the highest level of the game, it’s common to see 25 players on the roster.

That usually won’t mean 25 players traveling to international tournaments, but a total of 25 players can be registered in case they’re needed.

Usually you’ll travel with 15-16 players and a staff.

How Many People Are On A Volleyball Team Including Staff?

Team staff will often comprise a large chunk of a volleyball team and numbers can vary quite a lot for various levels of play.

When I traveled to Iran with the Australian national youth team for the Asian Championships, we travelled fairly light with a team of only 12 players, 1 head coach and 3 assistant coaches for 16 people total.

Without a lot of funding, this was a fairly expensive trip and so we didn’t have the luxury of extra players.

Some teams also travel with team doctors and sometimes assistant coaches will double up as therapists.

For Olympic level volleyball, you might have a couple extra therapists and a sports psychologist.

When travelling to foreign countries, teams will often travel with a liaison/translator, although they’re not usually considered part of the team.

How Many Players Are On A Beach Volleyball Team?

Only 2 players are allowed on each team in beach volleyball.

No substitutions, no coaches.

Someone gets injured? You’re out of luck and your tournament is over.

How many players are on a college volleyball team?

It’s typical to see between 15-20 players on a college volleyball roster, the average being 17-18 players.