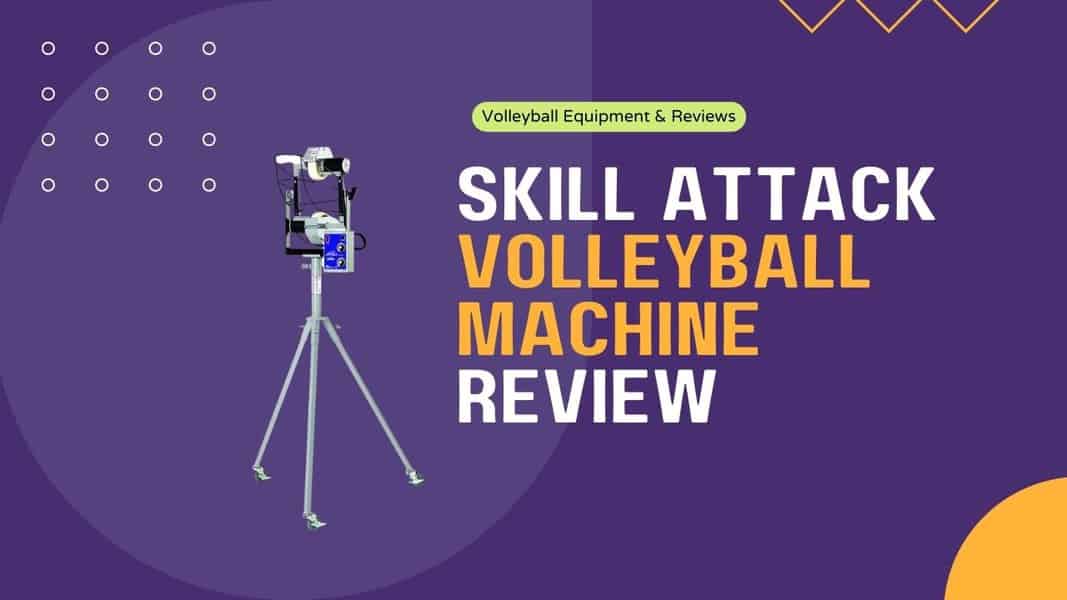 Using a volleyball serving machine is one of the most effective ways for players to get lots of repetitions in during training.

Having played volleyball internationally, I’m no stranger to volleyball serving machines and can personally attest to their effectiveness as a training tool.

Today I’m going to be taking a closer look at the extremely popular Skill Attack volleyball machine, known for its portability and very affordable price tag.

I’m going to cover the areas in which this machine really shines, its limitations, and who should and shouldn’t buy a Skill Attack volleyball machine.

First of all, let’s run through the main ways coaches and players use this volleyball machine.

The primary benefit of the Skill Attack volleyball machine is of course for serving.

You can definitely feed this thing volleyballs more quickly than you can serve yourself, and it’ll send the ball over the net with accuracy 100% of the time.

Any sort of serve receive drills will likely be enhanced by using a serving machine, especially if you’re lower on personnel.

Because the serving speed of this machine is on the lower side, it’s really nice to know it will still produce some really fantastic float serves which are definitely going to be challenging enough to pass for the vast majority of users.

Look at the movement on that thing!

I personally think the single best way to use this machine is to replicate a drill similar to the above, where you’re just beaming float serves at a couple passers repeatedly.

Can Be Used As A Setting Machine

One of the other major benefits of this particular volleyball machine is that it can be used as a setting machine.

Other larger serving machines like the Attack I/II or Total Attack aren’t nearly as good for this purpose as they’re significantly larger, more difficult to wheel around the court, and take longer to adjust for setting.

Can Be Used For Digging Practice

You definitely can use the Skill Attack for digging practice, but just know that it’s not quite going to simulate a normal spike extremely effectively.

This is because the ball release height is only 5’3″ which means the machine needs to be on the same side of the net as the digger, and the release angle will be much flatter than a typical spike.

Larger serving machines like the Attack II can be positioned so that the release angle is above the net on the correct side of the court, which simulates a far better spike.

Obviously since the release angle is so low with the Skill Attack, you won’t be able to use it for blocking drills like you could the Attack I/II.

I really don’t think blocking drills are a particularly effective way to use a volleyball machine, so this isn’t that big of a deal.

One of the best things about the Skill Attack machine is that it’s the only volleyball machine which can be easily transported to and from the gym.

Assembly/setup time is less than 5 minutes and it dismantles just as quickly to fit in the trunk of any car.

These serving machines are also super easy to wheel around the court with the tripod leg design.

Larger serving machines are challenging to move into position on court and even just adjusting the ball release angle can be difficult for some operators as the equipment is quite heavy.

Okay let’s address the elephant in the room.

This serving machine does not serve the ball very fast.

But Is It Fast Enough?

The top speed for this serving machine is 40mph which, when compared to the Attack II/I/Total Attack machines which serve at 70, 80, and 90mph, the Skill Attack machine definitely seems quite slow indeed…

But is this actually a limitation?

A similar study corroborated these findings when analyzing the fastest servers in the beach volleyball World Tour.2https://www.researchgate.net/publication/270395974_Serve_speed_peaks_in_FIVB_world_tour_beach_volleyball_2005-2012

So what does this tell us?

So while this machine might appear to not serve the ball particularly fast, it’s definitely faster than it looks!

Of course, it’s not going to be ideal if you’re looking to simulate elite men’s volleyball serves and still won’t be the best for elite women’s programs either.

This is mainly because you want your serving machine to fire balls faster than the competition you’re going to be facing, so you’re better prepared to handle serves in-game.

This is because the ball served from the Skill Attack has to loop up and over the net which makes it much easier to deal with than a ball with a flatter trajectory.

Having said that, I still don’t see serve speed as a deal breaker for a lot of users, especially because the Skill Attack machine produces some wicked floaters!

Will The Skill Attack Machine Damage My Volleyballs?

This volleyball serving machine is notoriously bad when it comes to marking volleyballs.

Yes, it will scuff your volleyballs.

Is this actually damaging the balls? I personally don’t think so.

I’ve trained for years with volleyballs that have scuff marks all over them from serving machine usage and never once did I think the marked balls were any less functional than the more pristine volleyballs.

You can expect to get marks like this on your volleyballs.

They definitely make your volleyball appear more worn, but won’t actually impact the functionality of the ball in any way.

You Can Try Sandpaper

I don’t actually recommend doing this, but if you’re overly concerned about scuff marks on your volleyballs, you can try using some 80 grit sandpaper to file down the throwing wheels slightly.

Several users have tried this and noted a significant improvement to the ball marking.

I’d be a little concerned it would damage the throwing wheels, but that’s for you to decide!

Personally I’d just let it scuff my volleyballs up. It adds character!

Is The Skill Attack Volleyball Machine Worth It?

The answer to this question is of course: it depends.

For some it will be a really excellent piece of volleyball training equipment and will be well worth the price tag.

For others, it will be virtually useless.

Who Should Get The Skill Attack Volleyball Machine?

I would recommend the Skill Attack volleyball machine for the vast majority of women’s volleyball programs up until the D1 college level.

This includes junior programs as well as all women’s high school volleyball programs and even some college teams could definitely benefit from it too.

Really any volleyballers around the age of 16-18 or below should be able to get good use out of this machine.

It’s also a decent option for smaller training squads or where there’s limited coaching staff, as it allows players to get lots of reps in by replacing the need for several dedicated servers during drills.

Who Should Avoid The Skill Attack Volleyball Machine?

For elite volleyballers, I wouldn’t recommend this serving machine.

For most college level volleyballers, the serving speed will become too large of a limiting factor.

I highly doubt experienced athletes would get that great of a training stimulus from using this particular machine.

These athletes will definitely benefit from using a serving machine, but it won’t be the Skill Attack.

Make sure you check out the link below to determine which serving machine is more appropriate for your particular volleyball program.

How many amps does the Skill Attack volleyball machine draw?

The amp draw on this machine is very low at 1.5 running amps and less than 5 starting amps.

No, the machine must be plugged in to be used. You might need to use an extension cable depending on where you’re using it.

How many balls does the Skill Attack volleyball machine hold?

You need to feed the machine one volleyball at a time.