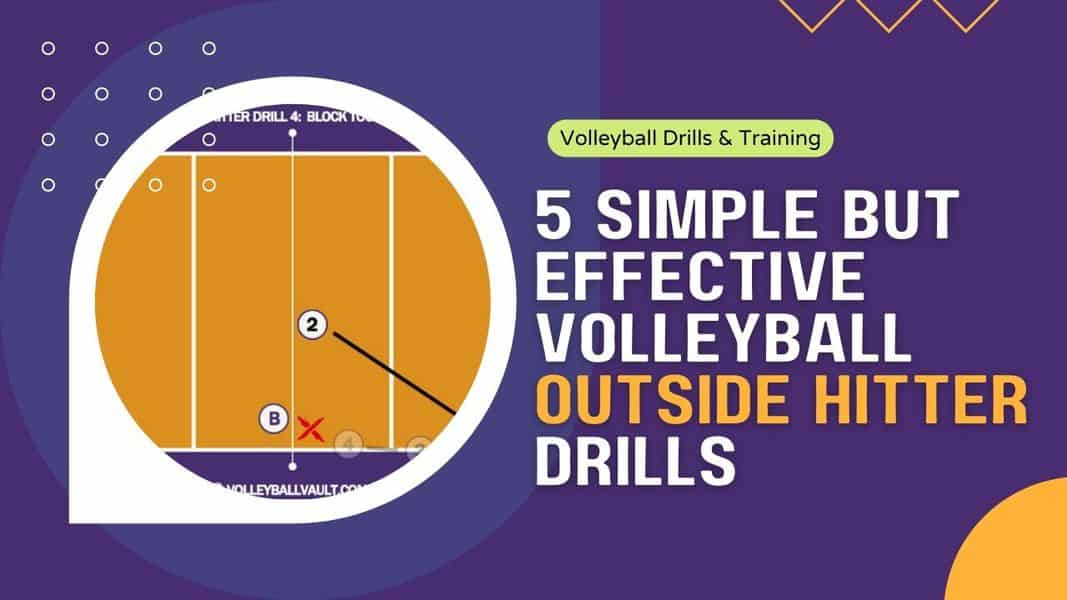 Volleyball drills don’t have to be complicated – quite often the best drills are incredibly simple.

I’ve come up with my 5 favorite outside hitting drills that are perfect for outside hitters of every level.

They’re extremely quick and simple to learn which means athletes can focus on improving their technique as opposed to worrying about where to go next.

Each drill can be modified til your heart’s content to make them easier, harder, or to include more players.

Most of these drills can be done with just 2 people but some require at least 3.

These drills also train athletes to be prepared for a variety of in-game situations that’ll arise when playing the outside hitter position.

Everyone knows this drill.

The ball starts with the outside hitter in position 1 (as above).

They then set the ball to the setter in position 2 who hits a downball/roll shot back to 1.

The key focus areas for this drill are transition footwork and spike timing.

The outside hitter should aim only for the back corners of the court and should swing as aggressively as possible.

This drill looks to simulate a poor pass where the setter is forced to make a long distance high arcing ‘release’ set to the outside hitter.

The ball will likely be further off the net than the hitter would prefer and will come in at a difficult angle to hit.

Position 1 starts the drill from the back/right court zone by setting a high release ball to outside hitter who has to spike the ball over the net.

The key focus areas for this drill are,

This drill can be made more difficult by putting any number of blockers on the other side of the net.

This drill is no different to the initial downball dig drill, only that we’re now hitting from the back/middle zone instead of the left side of the court.

The focus for this drill is aiming for the last 2 feet of the back court and avoiding hitting directly down the middle of the court.

Aim for the corners or seams between positions 1/6/5.

This is another simple variation of the initial downball dig drill.

The only difference is that we now have 1,2, or 3 blockers on the other side of the net.

As the outside is about to hit the ball, the blocker should deliberately ‘show early’ giving the outside a target to aim for.

The OH’s job is to tool the ball off the block in whatever way they can.

They can also aim to hit high off the hands of the block.

This drill can be made more difficult by forcing the blockers to block properly, as they would in a game.

In this case, the blocker would be trying to stuff block the outside who is trying to tool them.

The purpose of this drill is to simulate that ultra fast in-game transition from blocking into hitting.

The outside starts in the 1 spot, performs a block jump on the net, and then quickly retreats backwards to the 4 spot.

The setter in the 2 spot is to toss or set a ball nice and high somewhere around the outside’s hitting window.

It does not have to be a perfect set as we’re trying to recreate a scrappy release ball situation.

The outside hitter has to focus on sprinting back into position as quickly as possible once landing from the block.

They then need to swing on the ball regardless of whether they’re completely ready.

You can make this drill tougher by including a blocker on the other side of the net or by setting the ball before the hitter’s completely in position.