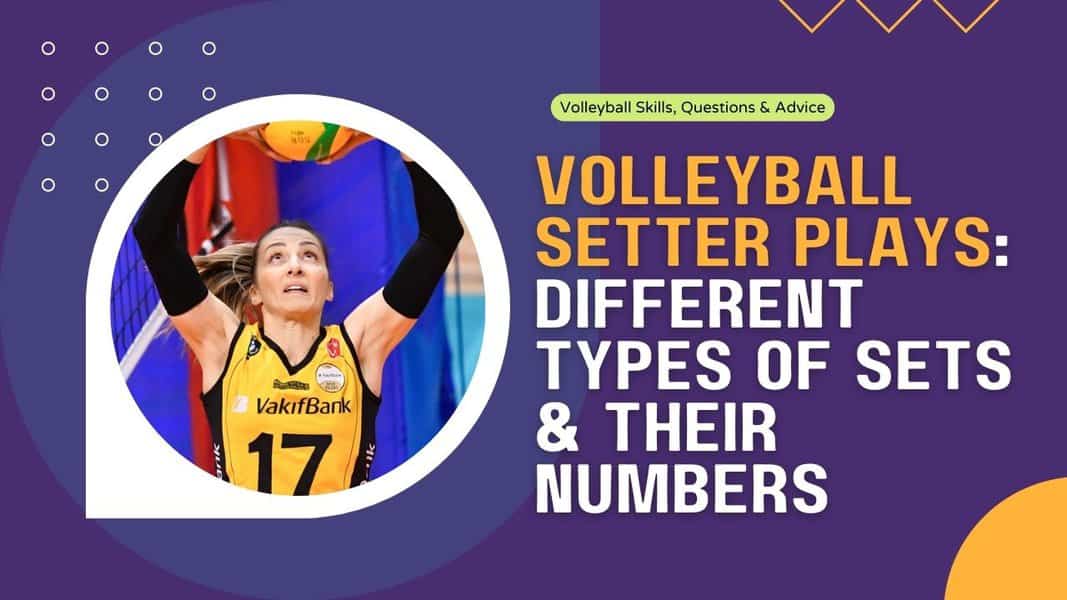 In volleyball, there’s about 20 different ways a setter can set their spikers.

Each set differs slightly (or a lot) based on the location on the court as well as the tempo or speed of the set.

Both setters as well as spikers need to be familiar with each of these different plays, so they can understand and utilize a variety of different attacks throughout a match.

In this article we’ll go over each of the different sets you’re likely to see from a setter, what it’s called, and what it looks like.

I’ve included animations of example plays so you can get clear visual of what it looks like.

There’s usually 4 different types of set you’ll see on the left hand side of the court: 4, Hut, Go, Rip. It’s usually the outside hitter responsible for attacking these balls.

This is a traditional high ball set right out to the sticks on the left side of the court.

This is a slightly faster tempo, lower arching outside set.

A “Go” is an even faster “2nd step” tempo outside attack.

For this speed of attack, the outside hitter should be on the second step of their approach when the setter is contacting the ball.

Referred to as either a “rip” or a “32”, this is slightly shorter and quicker outside high ball set between positions 4 and 3.

The middle blocker usually runs quick attacks through the center of the court: 1, Push 1, 3/Shoot, Back 1, Slide. There’s also the 2 AKA a meter ball.

This is a standard quick set to the middle blocker in front of but close to the setter.

Slightly off center quick set (further to the left than a typical 1).

Referred to as either a “shoot” or a “3”, this is a quick attack pushed even further to the left of the setter than a Push 1.

This is identical to a “1” except that it’s run behind the setter and not in front of them.

This is an attack where the MB begins in the middle or left of the court but runs to the right side to hit the ball. The ball should be set 3-4 feet above the net usually. The attacker will usually jump off one leg for a slide.

This is a high ball set to the front middle of the court. The lower/quicker version of this is known as a meter ball (shown below).

For the right side of the court, we’ve got the Back 2, 5, Red, as well as the D which is a back row attack. You’ll typically see the opposite hitter running these plays.

This is a set directly behind the setter to the right side attacker. The ball should be set in between positions 3 and 2.

This is a high ball set out to the sticks on the right side of the court.

Back row attacks are sets to players in the back row which means the attacker needs to jump from behind the 3 meter line.

The most common back row plays are the pipe (back center) and D (back right).

There’s also the A which is a spike from the back left (opposite to a D), although it’s a very uncommon play.

The A, B, and C sets are fairly uncommon – the vast majority of back row plays are pipes or Ds.

The “pipe” is a back row attack through the center of the court.

A “D” is a right side attack from the back row, usually run by the opposite hitter.

The “B” ball is a back row attack taking place between positions 6 and 5 – it’s right in between an “A” and a “pipe”.

The “C” ball is a back row attack taking place between positions 6 and 1 – it’s right in between a “D” and a “pipe” – basically the inverse of a B.

A back row quick attack (BIC) is simply a faster tempo/lower version of the aforementioned back row attacks.

At the highest levels of the sport, this BIC concept doesn’t really exist because it’s simply a given that back row attacks are run quickly.

Top volleyballers would therefore simply refer to a BIC pipe as a pipe.

The “pipe” demonstration above would technically be referred to as a BIC pipe by lower level players, but Saatkamp would probably just refer to it as a pipe… or whatever the Portuguese for pipe is…

Occasionally, setters will choose to run combination plays which is where attackers run unorthodox attacks around a condensed area of the court.

Usually the outside hits from the left, opposite from the right, and middle from the center, but during a combo play both the middle and one of the wing attackers will attack out of the center of the court.

The idea is to confuse opposition blockers.

Often referred to as a tandem attack, the ‘X’ combo involves the middle blocker as well as one of the wing spikers. The middle will run a quick and the wing spiker will usually run a 2, Back 2, or 32.

The play gets it’s name because the two attacking players should cross paths in their approach, almost like an X.

The “double quick” combination play is fairly self-explanatory. It’s a play run by both the middle blocker and opposite hitter – the MB hits a “1” and the opposite hits a “back 1”.

Each of the above volleyball plays/sets has a corresponding hand signal the setter will use to indicate to their spikers what play they want them to run.

It’s imperative that you as a spiker or setter understand how to read and use these hand signals.

Be sure to check out my full article explaining the various setter hand signals.