The 5 Best Outside Hitters In Volleyball In 2023 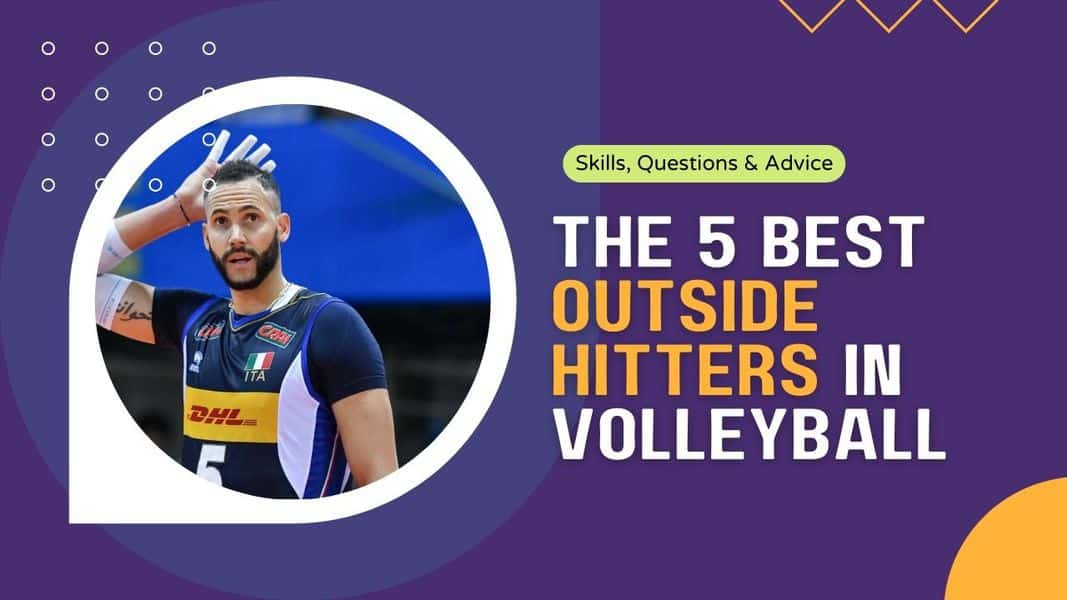 I decided to create a list of the best outside hitters of all time, but wanted to make sure they’re all still relevant to the game of volleyball in 2023.

So I’ve come up with a list of who I believe to be the current best outside hitters in the world.

You’ll notice that every player on my list happens to play professionally in Italy. This is more or less a coincidence, but speaks to the level of play in that league.

Cuban national turned Brazilian citizen, Yoandy has been one of the most dominant outside hitters for a good while now.

Well known for his ferocious athleticism and 371cm spike reach, Leal is one of those gifted players who are not only tall, but can jump out the gym.

Although he’s had a relatively uneventful 2022, he was voted best outside hitter in the 2021 Nations League proving he’s very much still relevant to the game.

Leal recently shared the below picture on his Instagram (@yoandyleal) as he reminisced about the season when he claimed 2 best outside hitter awards, a best spiker, and an MVP award.

Pretty impressive in its own right, except he went on to do virtually the exact same thing the following season!

Of Cameroonian descent, Earvin is a French national and recently received an Olympic gold medal as his team won their first ever Olympic championship in Tokyo.

Not only did he win Olympic gold, but N’Gapeth was crowned MVP and best outside hitter!

His Olympic games performance is quite literally everything young volleyballers dream of achieving!

N’Gapeth is another player who’s had an average start to 2022, but I think we can forgive him for his awesome performance at the Olympics!

Earvin rose to dominance in the sport around the time of his 2015 season in Italy.

Having played for two of the top clubs in the world, Modena Volley in Italy, and Zenit Kazan in Russia, Earvin is already one of the greatest outside hitters volleyball has seen.

He also crushed the 2020/21 Russian Superleague, earning another best outside hitter award.

If you’re an outside hitter, this is definitely one player to keep an eye on.

Matey Kaziyski is, in my opinion, a living legend in the sport of volleyball.

Hailing from Bulgaria, Matey is 37 years old and 203cm (6’8″) tall, making him one of the older professional volleyball players still competing against the best in the world.

The man defies both physics and logic boasting one of the most impressive vertical jumps in volleyball with a 390cm spike height!

To be 37 years of age and crushing guys almost half his age, while being more athletic than most guys on the court, is truly something special.

He did exceptionally well in both the Italian Cup and Supercup this season earning an MVP award, proving he’s definitely not washed up!

He currently plays for Trentino Volley in Italy and I hope we’ll see him continue killing it for years to come!

Originally born in Cuba, Juantorena has played for both the Cuban and Italian national teams and is widely considered to be one of the best outside hitters in volleyball today.

Osmany is 36 years old, 200cm tall, and boasts an incredible 370cm spike reach, making him one of the most physically dominant outsides the game has ever seen.

Osmany’s 2019/20 season was one of his best, earning best spiker, best outside hitter, and MVP.

He followed that up with another MVP and best outside hitter award in 2020/21.

Osmany Juantorena doesn’t have a ton of recent accolades this year aside from playing in the Club World Championship final.

Juantorena has been playing for Volley Lube in Italy since 2015 and has enjoyed a long and successful career.

Put simply, this guy has been at the top of the hill for long enough now that there are few guys in all of volleyball more impressive.

When all is said and done, this guy may well go down as the greatest volleyball player of all time.

Where do we even start with this guy…

As I’m writing this, Leon is so far ahead of anyone else in the 2022 rankings that it’s kind of unfair!

So far this season he’s racked up two best server awards, a best scorer, best outside hitter, and an MVP award.

It’s frightening to think how much younger this guy is than the other players in the top 5.

Historically speaking, he already is the greatest outside hitter of all time.

Leon is the Lebron James of volleyball. Definitely a special athlete worth watching.

Best Outside Hitter In Women’s Volleyball In 2023

This was a tough one because the two most dominant players of all time in women’s volleyball are both outside hitters!

Kim Yeon-koung has been one of the most dominant women’s volleyballers since time immemorial.

The 34 year old from South Korea is 192cm (6’3.5″) tall and currently plays for Shanghai Bright Ubest in China.

While most people tend to think of China’s Zhu Ting as the greatest outside hitter in women’s volleyball, as she deals with injury, we’re seeing Kim step back into the spotlight.

Based on current form and how she completely dominated the Korean V-League last year, I think she’s currently in a better spot than Ting (even if that’s largely because of an injury).

And she’s been at the top of the sport for considerably longer than Ting, so for now Kim will hang onto my top ranking for the ladies!