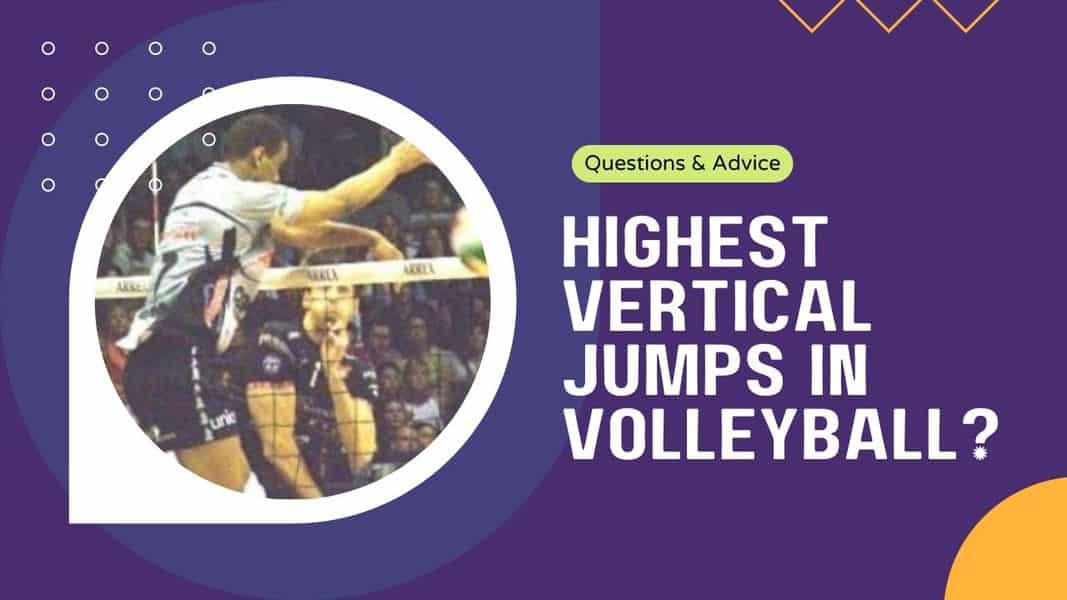 Professional volleyballers are well known as some of the most incredible jumpers in all of sports.

But just how high can top volleyballers jump and who are the springiest athletes in today’s game?

The current highest vertical jump in volleyball belongs to Matey Kazyiski of Bulgaria with an astonishing 390cm spike height.

Now there is plenty of debate around the accuracy of these numbers and what that converts to in terms of actual vertical jump height, but we’ll unpack that a bit more later on.

Vertical jumps vary a lot in volleyball, the main factor being position.

Some players are so tall and lanky (middle blockers) that they can contact the ball effectively without leaping particularly high.

And back court specialists don’t need to jump at all…

Of course we’re mainly looking at outside and opposite hitters here when thinking about these numbers.

Elite men’s volleyball players will usually be able to jump 33-45 inches with only a handful of athletes jumping higher than that.

For women’s volleyball, those numbers will be considerably lower and should be reduced by approximately 66-75%.

I’m basing these numbers off of our vertical jump performance targets we used as part of the Australian national elite volleyball development program.

I was able to get an extremely good feel for how high top level volleyballers can actually jump and what would be expected of us should we look to go pro.

What Is A Good Vertical Jump For Volleyball?

The answer to this question will depend on age, gender, height, and training age/experience.

For a professional volleyball player, a vertical jump of 35″ (89cm) or more is considered quite good.

For a 13 year old boy in his first season, a 25″ vertical jump is exceptional.

Comparing your vertical jump height to your peers will give you a decent idea of where you’re at within that skill bracket.

I’ve compiled what I believe is the current list of the most impressive vertical jumps in volleyball of all time.

It’s possible to find out how tall someone is and you can usually find a fairly accurate spike height, but there never seems to be standing reach information which makes actual vertical jump height impossible to calculate.

I’ve created this list based on ‘how impressive overall‘ I think an athlete’s vertical jumping ability is, based on height, spike height, and how they look when jumping.

I bet you were shocked not to see Loenel Marshall in the top position!

Everyone knows Marshall is the godfather of vertical jump in volleyball, but I think it’s time we shine the spotlight on another incredible outside hitter out of Bulgaria.

Matey Kazyiski earnt the top spot on my list when he recorded a 390cm spike height which is the current highest spike touch in the world (that I’m aware of).

Marshall only managed a 383cm spike reach and what makes this more impressive is that Kazyiski is only 6cm taller than Marshall coming in at 202cm in height.

If we assume Marshall and Kazyiski have the same length arms (i.e. standing reach), then Matey Kazyiski’s vertical would be 1cm higher than Leonel Marshall’s.

I have a sneaking suspicion that’s not the case, but nonetheless this is an extremely impressive athlete!

I believe at one stage he held the record for hardest spike as well!

The undisputed king of vertical jump, within the volleyball arena at least.

Leonel Marshall of Cuba is only 6’5″ (196cm) tall yet had an obnoxious 383cm spike height. Being a relatively average height player, it was truly a beautiful thing to witness this man jump.

Marshall was well publicized to have had a 50″ (127cm) vertical jump, although we don’t have any data to confirm this.

I wouldn’t be surprised if it was higher!

Unfortunately there’s no particularly amazing footage of him jumping, but in the above clip you can get a feel for how he was able to float through the air effortlessly.

Mireya Luis is a volleyballer also from Cuba whom most people would never have heard of.

But this woman has some freaky bounce!

Watching footage of Luis spike the ball is pretty incredible and I suggest you go watch some highlights on YouTube if you haven’t already!

Luis is only 175cm tall but has a phenomenal 339cm spike reach which is virtually unheard of for female volleyballers. The fact that she’s not even close to 6 foot makes this ridiculously impressive.

This might be the most impressive vertical jump in the history of volleyball, and I could easily have put Luis right at the top of my list!

Japan’s superstar Yuji Nishida has earnt a place on my list with his incredible jumping ability.

At only 186cm tall, his 346cm spike reach is near world class and is seriously impressive for an athlete of his height.

What’s more impressive than the number is how beautiful his jumping form is. The flared legs captivate fans as he elevates into the air and seemingly glides for seconds.

USA’s very own Ben Patch also makes my list with one of the top vertical jumps in professional volleyball.

The fact that this man is only 203cm (yes, only) with a 382cm spike height is incredibly impressive.

One of the traits of extremely high jumpers is that they look smooth and effortless as they’re launching into the air and Benjamin Patch is the definition of smooth!

What Is Spike Height In Volleyball?

Spike height, otherwise referred to as spike reach or spike touch, is the highest point an athlete can reach in the air after a running vertical jump.

The earlier clip of Matey Kazyiski is of him testing his spike height/spike reach.

How Do You Measure Spike Height In Volleyball?

Spike height can be calculated using a variety of vertical jump measurement tools, the most common is the vertec.

Alternatively you could use a vertical jump mat or force plate which would calculate your vertical jump height, but then you’d need to add your standing reach to this figure to get spike height.

The simplest way to measure your spike height in volleyball is to be like Kazyiski and use a vertec.

What Is A Good Spike Height In Volleyball?

Just like for vertical jump, the answer to this question will depend on age, gender, height, and training age/experience, as well as position.

This was the target my national team coach had set for all us junior national level volleyballers. Very few athletes in the junior program were able to reach this target.

A 350cm spike height is definitely above average even for professional volleyball players, which is why Matey Kazyiski’s 390cm spike reach is simply out of this world!

For women, an elite spike height would be around the 320cm mark while the college average for women is only 280cm.

What is The Olympic Average Spike Height In Volleyball?

Data pertaining to Olympic rosters isn’t super easy to come by, but the FIVB website lists the team rosters for the world cup, which include spike reach.

The average USA men’s volleyball spike height was 346cm according to the FIVB website.

The Brazilian roster’s average spike height was only 325cm.

Tough to say how accurate these numbers are, since they’ve got Ben Patch’s reach listed at only 368cm…

I’d imagine most Olympic level men’s spike heights to be somewhere between 320-345cm on average.

It’s important to note that these stats include numbers from liberos who are going to bring the overall numbers down somewhat.

Who jumps higher, volleyball or basketball?

There isn’t a lot of comparable data to definitively say but we know that the average NBA vertical jump is 28″. I mentioned earlier that a solid volleyball vertical jump would be 35″.

Even if the average vertical jump in volleyball is lower than 35″, I imagine it would certainly be higher than 28″, at least if we exclude liberos.

Basketball demands different types of agility and endurance as players need to be able to run up and down the court all game. This isn’t the case in volleyball, so athletes can focus more on jumping as high as they possibly can.

I think it’s fair to say volleyballers jump higher than basketballers on average.

How do volleyball players jump so high?

Volleyball players are able to achieve such impressive vertical jumps through a combination of resistance training as well as plyometrics.

Check out this article for more information on how volleyball players increase their vertical jump.

What is the woman’s D1 volleyball average spike height?

While we don’t have division 1 spike height stats specifically, the average spike height of a women’s college level spiker is 280cm or 9’2″.1

The top 80th percentile being 290cm or 9’6″ which is probably a decent benchmark for D1 women’s volleyball.