The 5 Best Setters In Volleyball In 2023 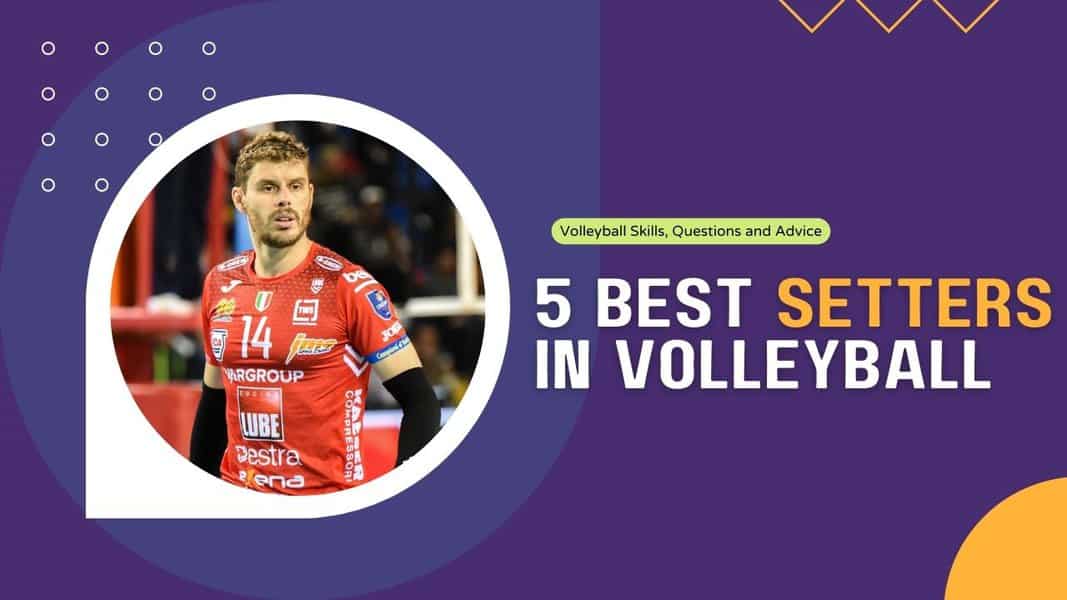 Today we’re going to look at the 5 best setters in the volleyball world, as I see it.

This was one of the more difficult top 5 lists to put together because there’s quite a few players you could argue belong somewhere in the 3-6 position.

Total number of matches under their belt, consistency over the years, awards to their name, and current form are the criteria I’ve used to compile this list.

Micah Christenson was one of those guys who could easily rank higher on this list for a number of reasons.

He’s a veteran setter at this point in his career with north of 300 matches under his belt.

At only 29 years of age, and standing 198cm (6’6″) tall he currently plays for Russian power houses Zenit Kazan.

I think it would be fair to classify Micah as one of those very physical, athletic setters. At almost 2 meters tall, he’s right at the top of the height range for this position.

On top of that, the guy can jump. With a 349cm spike reach and a ridiculous 340cm block reach, Micah is one of the most formidable blockers in the sport of volleyball.

Receiving the best setter award in the Italian league in the 2020/21 season, along with best setter for the 2021/22 CEV cup, Christenson is in pretty solid form of late and definitely deserves a place on this list.

And depending on who you ask, he deserves to be a lot higher on this list, with many fans proclaiming he’s currently the top setter in the world, which might not be far from the truth!

Italian national team player, Giannelli is another one of those phenomenal athletes many argue to be the current best setter in the world.

Having played in Italy for over a decade and playing as captain for Trentino and now Perugia, he’s gained a ridiculous amount of professional experience at such a young age.

With just shy of 400 professional matches under his belt, Simone started playing volleyball in the toughest professional league in the world for Trentino at age 17 which is absolutely unheard of…

At only 25 years old and 199cm tall, if Simone isn’t already the best setter in the world, he has more opportunity than most to grow into that position.

Receiving the award for best setter at the 2021/22 Italian Cup as well as an MVP award at the 2021 European Championships, Giannelli is in excellent current form.

When it comes to veterans of the sport of volleyball, William Arjona is a living legend.

Starting his career in 1996, he’s played all but a few years of his professional career in Brazil.

The 42 year old is only 185cm tall and not the most physical of athletes, which is fairly common for players hailing from Brazil.

What he lacks in height, he more than makes up for with talent and experience.

To this day he’s still racking up best setter and MVP awards at an exceptional rate, so he’s by no means washed up.

While he may be towards the end of his career, his achievements are too extensive to ignore.

It’s really difficult to say exactly where Arjona belongs on this list because by many metrics, he’s deserves to be right at the top. Regardless of where he sits, he certainly deserves a spot on this list.

I’ve got Pavel Pankov ranked in second place because of his blistering form in recent times.

Just like Christenson, Pankov is an extremely physical athlete with great length and jumping ability.

The Russian Superleague is well known for attracting some of the largest and most physical professional volleyball players in the world, so it’s no surprise to see Pankov there competing against the likes of Micah.

Pankov is absolutely dominating the Russian league and taking names. His recent accolades include:

As I write this, Pankov is the 5th ranked player in the world in 2022 and finished 2021 as the second highest ranked volleyball player on the planet! In 2020 he finished in the top 20 as well.

This guy’s a machine and if he keeps up this current form, he has an excellent chance of potentially going down as the greatest setter of all time!

If you ask any volleyball player who the greatest setter of all time is, they’ll probably answer with ‘Bruno’ more times than not.

The Brazilian is widely considered the GOAT for good reason.

At 35 years of age, he’s been playing the sport for his entire life and has amassed almost 400 matches in his career.

At 190cm tall, as with most Brazilian players, he’s not a particularly physically gifted player but makes up for it with simply unmatched talent.

Bruno is currently the 7th highest ranked volleyball player of all time and is still performing at the highest level, playing in Italy for Modena.

With 2 silver Olympic medals and 1 gold, Bruno has had one impressive career and is recognized as a pretty massive celebrity in Brazil.

Best Setter In Women’s Volleyball In 2023

I didn’t think it would be fair to only discuss men here, so I’ve decided to include who I think is the top women’s volleyball setter in today’s game.

This was a pretty close one between Maja and Nootsara Tomkom.

I really wanted to give the top women’s setter position to Nootsara because I live in Thailand, but it would simply be unfair to Ognjenović who I believe is the top female setter in the world right now.

At 183cm, the Serb is a very tall and athletic setter with almost 300 matches under her belt.

Part of the reason I consider Maja to be the most worthy of the top spot is because she’s played a lot of her career in Turkey, which is considered the highest standard of professional women’s volleyball.

At 37 years old, Maja is still racking up MVP and best setter awards and is very much still a dominant force in the Turkish league.