Can You Touch The Net In Volleyball? 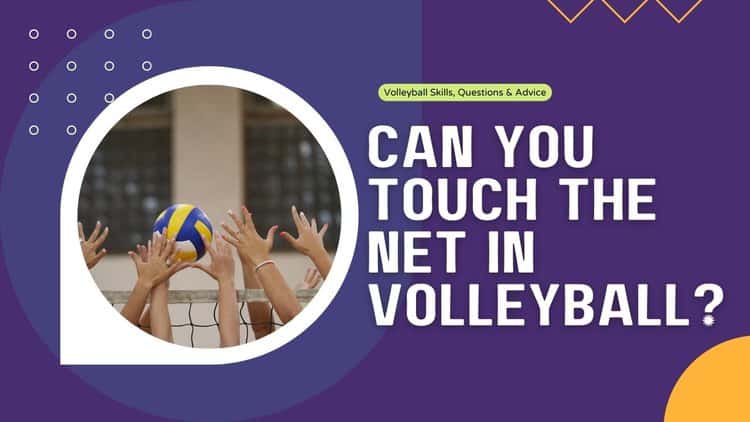 With the rules of volleyball constantly evolving over time, including the ‘player at the net’ ruleset, it might not be immediately obvious exactly what the rules are regarding making contact with the net.

In both indoor and beach volleyball, you’re not allowed to contact the net during an action of playing the ball, or if it interferes with play.

Later on I’ll also clarify exactly what is meant by ‘during the action of playing the ball’.

There are some instances where touching the net is acceptable, so as a player you have a responsibility to your team to know exactly when it is and isn’t okay to make contact with the net.

This ruleset is identical for both NCAA and FIVB competition and I’ve included links to the official rulebooks at the end of this article.

When You Can And Can’t Touch The Net In Volleyball

There are some instances in volleyball where it is okay to touch the net during a rally, and some that will result in your team losing the point…

We’ll first address indoor volleyball and then address beach volleyball towards the end of the article.

When Can’t You Touch The Net In Volleyball?

You’re not allowed to touch the net between the antennae during an action of playing the ball – this phrase is broadly defined as any attempt to touch the volleyball (dig, set, spike, or block), as well as your jump take-off, or landing from a jump.

Also if you are contacting the net outside of the antennae, if you’re using the net, ropes, referee stand, or post as support, it’ll also be considered a violation.

Any player close to the ball as it is played, and who is him/herself also trying to play it, is considered in the action of playing the ball, even if no contact is made with it.

The most obvious example of this is where two blockers attempt to block or swat the ball, one successfully makes contact with the ball, while the other misses and instead contacts the net.

This is considered a fault.

When Can Volleyball Players Touch The Net?

This refers to accidental contact with the net when you’re not attempting to play the ball.

Imagine you’re a middle blocker and the ball has been set to the outside hitter, you turn around to cover the spiker and accidentally brush up against the net, and it doesn’t interfere with the play…

In this case, no harm, no foul.

If you brushing up against the net causes the net to bounce up and down, interfering with the play, it would be a violation.

When the ball is driven into the net, causing it to touch an opponent…

If you’re blocking and your opponent absolutely tanks the ball into the net, causing the net to make contact with you or your arm, it is not considered a net touch and play continues.

Contacting the net outside of the antenna…

In volleyball you’re allowed to touch the net as long as it’s outside of the antenna, does not interfere with play, or used as a means of support.

This extremely good call by the referee shows they know exactly what the rules are.

Since the player contacted the net outside the antenna, and didn’t interfere with play, play was allowed to continue.

Can Your Hair Touch The Net In Volleyball?

Neither the FIVB nor NCAA rulebooks specify whether your hair touching the net is a violation while playing the ball, but it’s generally accepted that most referees will not call net violations if a player’s hair or jersey merely touches the net.

Regardless of how hard you hit the net with your hair or clothing, it should still be close to impossible for it to actually impact the play.

If you get your hair caught in the net, to the point where the net is moving around as a result, then this will of course be called as a violation – although I’ve never heard of anyone witnessing this situation.

What Happens If You Touch The Net In Volleyball?

If you’re caught touching the net in an instance when it’s not permitted, one of the referees will call a net touch violation and the other team will be awarded the point.

What happens if you and someone on the other side of the net illegally touch the net at the exact same moment? In this case the ref will call for the point to be replayed.

Why We Have Net Violations In Volleyball

There’s two primary reasons we have these net touch rules: safety and fairness.

Many younger volleyballers who lack control over their bodies will often jump too close to the net and will occasionally end up jumping into/landing on the net which can be pretty dangerous.

To discourage unsafe jumping around the net, the phrase ‘during an action of playing the ball’ is inclusive of any jumping action which also requires the player to land safely without contacting the net.

So even if you jump, spike the ball, and the ball crosses the net before you land – but you touch the net as you’re landing, it’s still considered a net touch violation.

The other reason as I mentioned pertains to the aspect of fairness.

If you jump to spike the ball and pull the net down while you’re hitting, you’re giving yourself an unfair advantage.

Because in many instances it’s difficult to gauge whether a net touch actually created an advantage or not, it’s now a blanket rule that all net touches are deemed either unsafe or create an unfair advantage.

History Of The Net Touch Rule

If we go back to 2010, the rule was such that “any contact with the net by a player is not a fault, unless it interferes with play”.

The primary difference here is that you could in theory be spiking the ball, touch the net, but not really create an unfair advantage/interfere with play, and it would be considered acceptable play.

This left a lot of decisions up to the discretion of the referees and this would often lead to heated disagreements and conflicts.

The rule was changed such that any net touch while playing the ball, regardless of if it interferes with play, is now deemed illegal.

Personally I think this is a great rule change that took a lot of ambiguity out of calls that could realistically go either way.

There are some other closely related rules that you might want to be aware of if you’re asking about net touch violations.

The major one is the notion of ‘encroachment’ or crossing the center line in the middle of the court.

Basically you’re allowed to cross onto the other side of the court, so long as part of your foot (or hand) remains in contact with the center line.

Please excuse my awful graphic design skills, but you get the point!

You also can’t interfere with opponents – i.e. if most of your foot crosses the center line (but not entirely), but you trip one of the opposing players over, it’s considered interference.

You can also cross under the net onto the opponent’s side of the court, so long as you’re outside of the bounds of the court (i.e. outside the antennae), as long as it doesn’t interfere with your opponents.

This play is completely legal as the player was mindful to cross under the net outside of the bounds of the court.

Can You Touch The Net In Beach Volleyball?

Nowadays the rule for beach volleyball is exactly the same as it is in indoor volleyball, you can’t touch the net at all if you’re in the action of playing the ball.

Having said that, prior to 2014 the rules were a little different on the beach…

You only weren’t allowed to touch the tape at the top of the net or the antenna above the net.

You could contact the net or antenna below the tape even while playing on the ball, so long as it didn’t interfere with play.

These are the official rule changes that took place in 2014.

So whether you’re on the beach or playing on an indoor court, the rules are now the same and you simply have to remember not to touch the net while playing the ball!

The main take away here is that you are not allowed to touch the net while you’re making a play on the ball.

Additionally, you are allowed to touch the net if you’re not involved in the play, so long as it doesn’t interfere with the play.

As some general advice, avoid touching the net at all times and make sure you’re able to safely land when spiking without ending up like a fish caught in a net!

Both the NCAA as well as FIVB rules agree on all points mentioned.