Is Volleyball Hard? 5+ Reasons Why It Isn’t An Easy Sport 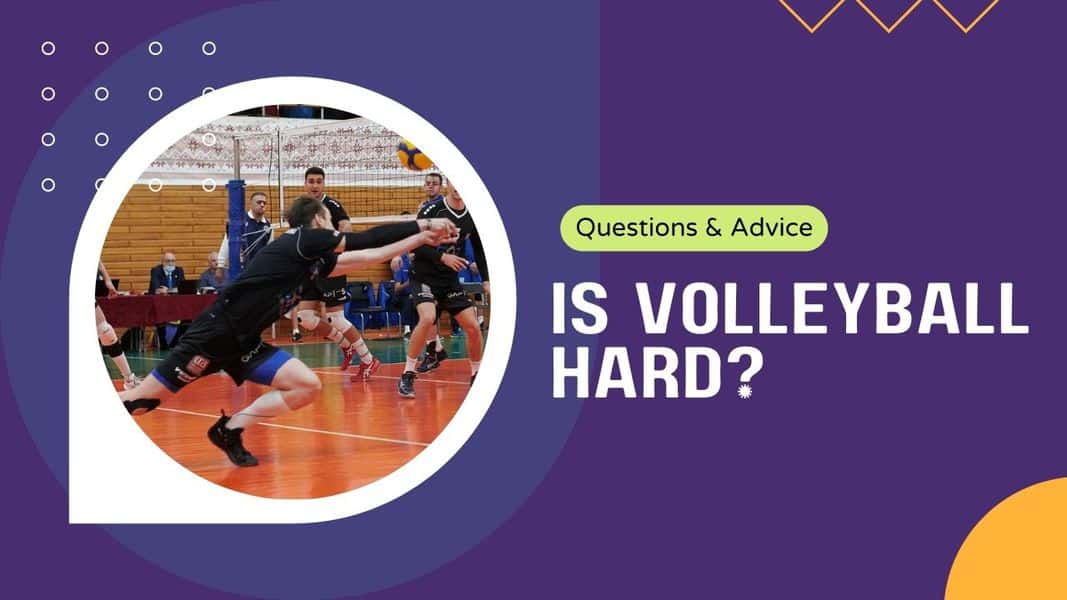 Understanding the rules, rotations, and positions is one thing… but then actually getting the ball back over the net is another.

Volleyball is a very hard sport because it’s not only particularly difficult to learn as a beginner, but also requires a number of uncommon physical attributes to master.

As someone who started out as a frustrated beginner and eventually found myself playing in international level tournaments, I’m going to share with you exactly why I think volleyball is a really difficult sport.

Oh and if you let this article discourage you from playing volleyball, you probably weren’t cut out to play it anyway!

Is Volleyball Considered A Hard Sport?

Honestly, it’s not that physically demanding as you’re effectively just standing around on a court and jumping every now and then.

Your heartrate stays relatively low throughout a match and you’re almost never out of breath.

So what’s the big deal?

What’s So Hard About Volleyball?

Despite each of those things being completely true, there’s actually a lot of aspects about volleyball that make it really challenging.

Let’s run through 5 of the main ones…

1. Learning The Basic Skills Is Really Hard For Beginners…

The initial reason that volleyball is hard is because of the technical difficulty of performing the basic skills.

That first learning curve is a big one.

I’ll unpack this one in more detail shortly.

2. The Ball Moves Way Too Quickly…

This is particularly frustrating at the senior men’s level of the game.

These guys crush balls at over 100mph.

That’s a volleyball moving at over 150 feet per second…

As a back court defender, if the attacker gets the ball past the block, you quite simply don’t have anywhere near enough time to react.

It’s incredibly frustrating when your entire job is to ensure that ball stays off the ground, yet you can barely even see where the bloody thing is going!

3. The Better You Get, The Harder It Becomes…

As soon as you’ve started to get the hang of the basic skills, the game only gets tougher.

As you figure out how to spike the ball, the guy on the other side of the net is figuring out how to block properly.

As you’re finally starting to grow, you begin playing against much taller opposition.

For me, volleyball was probably the easiest it’s ever been in the first couple years I was playing.

4. You’re Handicapped By Your Height…

I’m 6’5″ or 196cm and, excluding the liberos, I was the shortest player on the junior national team.

Well, to be fair, there was 3 of us with the same height, but still…

To make matters worse, I was told I was too short to make it much further in the sport…

Part of the reason for that was because I was a middle blocker and 196cm simply wouldn’t cut it at the senior men’s level, but that also meant I’d have to make some drastic changes to my game and learn how to be an outside or opposite hitter.

While you can succeed as a volleyballer without being crazy tall, it’s going to be exponentially harder.

And if you’re on the shorter side and dream of playing professionally, your best hope is to be a libero!

5. All The Top Players Are Physical Specimens…

It’s truly difficult to appreciate just how ridiculously big these athlete can get.

Volleyball is the tallest sport in the world.

But there’s a difference between just being tall, and being a tall athlete.

On TV these guys look wirey and lanky, but when you see them in person, they look a lot a whole lot bigger and thicker.

Is Volleyball Hard On Your Body?

To be completely honest, yes and no.

I say no just because it’s a non-contact sport. You’re not exactly at risk of chronic traumatic brain injury by playing volleyball…

I say yes because it’s really really tough on your joints.

Volleyball Is Particularly Brutal On The Knees

All the jumping will eventually cause your knees to turn to dust.

When I trained full time at an elite volleyball academy from the age of 15-17, all 8 of us athletes in the program had knee issues.

The most common problem was patella tendinitis (jumper’s knee). A few of us had meniscus tears and I think one guy had bursitis.

But we all had inflamed knees from jumping and landing so much.

Every time you spike a volleyball, you’re putting a lot of stress on the shoulder joint.

I don’t think you could find one professional volleyball player who hasn’t had some sort of issue with their shoulder during their career!

Ankle Guards Are Worn For a Reason

The main issue is when you land from a spike or block attempt, you’ll often land right around the net where there’s a lot of feet.

Landing awkwardly on someone’s foot is a surefire way to do your ankle.

After 10 years of basketball and 15 of volleyball, I now have scar tissue on my right ankle which partially inhibits its range of motion!

What Is The Hardest Volleyball Position?

The hardest volleyball position is the setter because they’re central to every play and shoulder far more responsibility than other players on the court.

The setter is the glue that holds the team together.

They’re responsible for delivering the ball from the passer to the perfect hitting window so an attacker can put it away.

When things go wrong, the setter often cops the blame.

Is Volleyball Hard To Learn?

Volleyball is exceptionally difficult to learn as a beginner because of how foreign the movements of passing, setting, and hitting are.

The worst is just having no intuition about where to go on the court or which balls you should go for.

I struggle to watch junior level volleyball because it’s so insanely frustrating!

It’s the same as low level tennis: the whole match is just error after error on repeat…

I take my hat off to those brave, patient souls who can coach grade 8 volleyball!

Is Beach Volleyball Harder Than Indoor?

If you thought indoor volleyball was tough, beach volleyball is substantially more difficult.

Here’s 8 reasons why beach volleyball is harder than indoor.

1. You Only Have One Other Player On Your Team…

The court is still pretty big so you need to be a lot more accurate.

3. It’s Way Harder To Make A Living From…

I wrote more about the difficulties of earning a living as a beach volleyball player.

It’s just you and your partner on the court. If they get injured, your tournament is over.

Again, it’s just you and your partner in tournaments. While playing, you’ve got to figure it out by yourselves.

7. The Sand Can Get Really Hot!

It’s not just the sun you need to be careful with, but the sand can give your feet first degree burns on a really nasty day.

Sand socks have saved me on more than one occasion!

And I mean everywhere. After a while, this becomes genuinely frustrating!

How Hard Is It To Make A Volleyball Team?

This one will depend a bit on what team you’re trying out for, what position you play, and how much experience you have.

Is It Hard To Make The Freshman Volleyball Team?

The answer to this question depends on how seriously your school takes volleyball.

Some schools will take virtually anyone as there’s not a ton of interest, and some freshman classes will have multiple teams with some already decently experienced players.

Regardless of how experienced you are, you should definitely try out!

Is It Hard To Get A Volleyball Scholarship?

There is some really excellent data that sheds some light on this.

In the USA, approximately 5.7% of high school volleyballers go on to play some level of college volleyball.

Roughly 1% of players will earn a division 1 volleyball scholarship.1https://stacksports.captainu.com/the-4-most-common-volleyball-scholarship-questions-answered/#:~:text=What’s%20My%20Best%20Chance%20For,women%20and%204.5%20for%20men.

Having said that, I don’t believe those numbers take into consideration international talent.

Now more than ever young athletes from all over the world are trying to land NCAA sporting scholarships, so in reality competition may be a little tougher.

How Hard Is It To Make A Club Volleyball Team?

As long as you have some interest in the sport and ideally a little experience, you shouldn’t have too much trouble getting into club volleyball.

Most clubs have multiple teams for each age group which cater to varying skill levels.

Is Volleyball Hard To Master?

During hitting practice one day, my old national team coach once said that spiking a volleyball is the hardest skill of any sport to master.

I doubt that’s true, but it certainly feels like it at times!

As I mentioned earlier, the better you get at volleyball, the tougher the game becomes.

Passing is very different to when you first began playing…

Now you’re up against a jump serve which moves at 25 meters per second.

The volleyball court is only 18m in length, by the way.

So you’ve got a lot less than a second to figure out how to pass this ball which is spinning and curving away from you.

Spiking a volleyball at the highest level is incredibly difficult to do well.

Imagine having to try to kill the ball around a triple block where each of the defenders are 200cm tall!

You also need to run your attacks extremely quickly so that the block can’t get in position.

One of the things I struggled with the most was learning how to time a fast paced outside attack – you’re literally beginning to jump before the setter has even contacted the ball!

Getting the ball toss in the right spot consistently is hard enough, and then you’ve got to perfect the timing and contact the ball just right.

Defenders have a near impossible job at the highest level.

The reaction time needed just to make any sort of contact with a hard hit ball is unfathomable to most.

If after reading all that you only feel more excited to play, then you’ve probably got what it takes to pursue the sport seriously!

Even if you have no aspirations to play volleyball at the highest levels, it’s still a great, social game and you should play it anyway!

Is volleyball harder than basketball?

This is a very subjective question, but I’m pretty qualified to answer it as I played basketball for 10 years and volleyball for longer.

In all honesty, I think basketball is probably slightly tougher mainly because of the physicality of the game. It’s very much a contact sport compared to volleyball and you also have to be extremely physically fit to run up and down the court constantly.

I’d argue that the skill of spiking a volleyball is probably quite similar to shooting a 3. To master either of these skills takes a lot of repetitions and years of hard work, but I don’t think it’s fair to say one is necessarily harder than the other.

How many days does it take to learn volleyball?

You’re having a laugh if you think you can learn volleyball in just days!

Maybe if you played 3-4 days straight you’d have a fairly good grasp of the rules and basic rotations, but you’re looking at 3-4 years at least before you’re any decent at the game!