What Is A Kill In Volleyball? 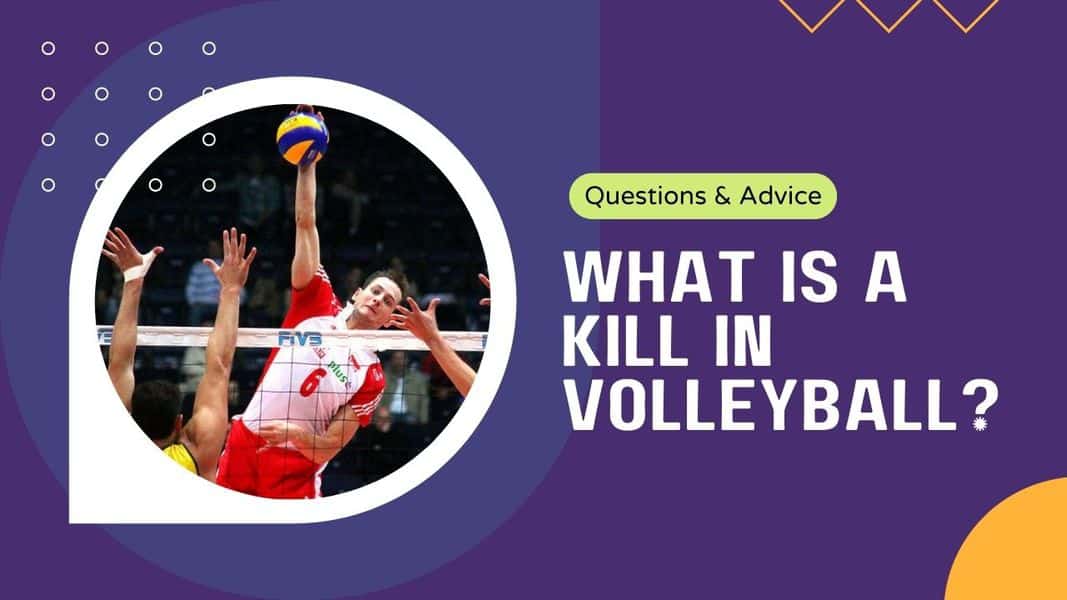 Being able to kill the ball in an efficient manner is the hallmark of a great hitter in volleyball.

A kill in volleyball is defined as an unreturnable spike which results in a point for the attacking team.

It’s effectively the same thing as a winner in tennis.

The rest of this article will discuss exactly what constitutes a kill in volleyball, and how you can improve your ability to kill the ball.

Kill percentage is defined as number of kills/number of attempts.

This tells us a little bit about how well I’m spiking the ball.

Kill Percentage Is A Flawed Metric

However we rarely use kill percentage in volleyball anymore…

In the above example we know that I had 10 attempts and made 5 kills, but this tells us nothing about how many errors I made.

Did I hit the ball into the bottom of the net 5 times in a row? Or did the defense make 5 spectacular defensive plays?

Kill Efficiency Is A Superior Stat

Hitting percentage (often referred to as kill efficiency) describes how effectively a player is able to attack the ball by factoring in how many errors they make.

What Is A Stuff Block In Volleyball?

A stuff block, often referred to as a kill block, is one of the most exciting plays a defender can make in the sport of volleyball.

A stuff block refers to blocking an attacking spike with such force that the ball immediately rebounds back at the attacker, usually going straight down to the ground.

Is A Block A Kill In Volleyball?

Kills refer only to offensive plays in volleyball. It’s a stat used to track how efficient players are at hitting the ball.

As such, a kill block does not count as a kill in volleyball.

Instead, blocks are recorded separately as their own stat, which is used to determine defensive efficiency.

How Do You Get More Kills In Volleyball?

There are a number of things you can work on to increase the number of kills you get in volleyball.

It’s important to remember that the amount of kills you manage largely depends on how skilled the defense of the opposition team is.

If you’re up against a really weak team with short blockers, you’ll automatically get more kills than you would if playing against tougher opposition.

I’ve come up with a list of 10 things you should consider if you want to start racking up more kills on the stat sheet.

The players who get the most kills in volleyball are extremely technically proficient at spiking.

They jump smoothly, contact the ball high, and are above all else really consistent.

My old national team coach once said that spiking a volleyball is the hardest skill to master in all of sports.

I have no idea if that’s true, but it’s probably up there!

If you can get more focused and deliberate hitting practice in, your technique will improve substantially.

This one’s a no brainer.

Volleyball at a high level is played well above the net.

Being higher above the net simply makes you a more efficient attacker, which means way more kills!

Be sure to check out my full article explaining how to jump higher in volleyball.

When doing hitting practice, actually consciously focus on spiking the ball as powerfully as possible.

Obviously you need to be smart about this.

Not every ball should be hit hard.

This ties nicely into swinging aggressively…

So you need to get in the weight room and work on developing your back, shoulders, arms, and core to be stronger.

By deploying that newfound strength as fast as possible (speed), you’ll develop power.

The higher level volleyball you play, the faster the offensive plays will generally be.

When you first start in volleyball, the ball gets set nice and high, completely telegraphing who it’s going to.

These plays work fine for beginners because simply getting the ball over the net can be a challenge.

But when you’re playing against strong opposition, slow paced, high sets will get sniffed out by blockers who will make it nearly impossible for you to kill the ball.

A 2nd step attack is a fast paced play where the hitter is already on the second step of their approach while the setter is contacting the ball.

In the above clip the attacker is setting a ‘Go‘ attack (sometimes referred to as a black) to the outside hitter.

Running these fast plays can be difficult to get right as your timing must be perfect, but if you’re able to pull it off, you’ll beat the block and get plenty of kills.

The last thing you want is to be known as a hitter who only ever hits the ball straight.

This is a pretty common theme when it comes to middle blockers at the junior level.

Avoid being a one dimensional attacker by practicing slicing the ball (off spin/ wrist pronated) or opening your hips up to hit the ball across your body.

Getting more kills in volleyball is all about beating the block.

Imagine you’re an outside hitter…

You’ve been set a Go right out on the sticks and the opposition blocker is a little slow.

If you’re able to swing across your chest, you can hit the ball down the line before the blocker has a chance to get in position.

To hit a kill down the line as an opposite, if you’re not left handed, will be a little tougher as you’ll have to wait for the ball to cross your body – you may have to chop at the ball with some side spin to get it to go where you want.

Your opposition blockers should work together as a unit.

However some opposition teams may have a really slow middle or, for one reason or another, the double block often has a seam (a gap) in it.

If you’re switched on enough to identify this, aim for the seam when spiking, because even if you don’t get a kill, you’re likely to get a decent tool off the block.

9. Aim For The ‘International Hitting Zone’

What this zone refers to is an imaginary 3 foot internal border that runs around the court from beyond the attack line.

The premise is simple.

By aiming for the international hitting zone you’re going to be tougher to block and defenders will have a harder time getting into position.

If all else fails, find a local social game where the players are at least 5 years younger and less experienced than you.

These amateurs will have no idea how to block and you should be able to kill every ball!

What is the difference between a spike and a kill in volleyball?

A spike simply refers to hitting the ball. It’s possible to hit the ball and not kill it (i.e. when someone blocks you, you hit it out, or the defenders dig it).

A spike is only a kill if it’s unreturnable and directly leads to you scoring a point.

If I tip the ball over the net, is it a kill?

It’s absolutely a kill if you win the point.

There’s no rule that says you have to hit the ball a certain way for it to be considered a kill.

A kill is simply any attack that directly leads to you winning a point.

So if you tip the ball over the net and your opponent is unable to keep it alive, you’ll be awarded a kill.