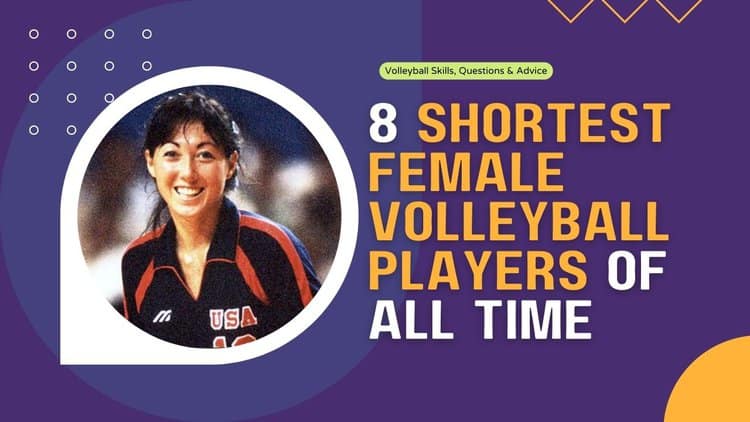 Volleyball is the tallest sport in the world, so when you’re not only ‘not tall’, but actually pretty short, you’ve got your work cut out for you!

Six of these ladies are currently playing professionally and two have retired. Four are professional indoor players, three play in pro beach volleyball tours, and one is a college athlete.

Starting with the indoor players, we’ve surprisingly got more setters than liberos on this list!

I often talk about how height is very rarely a limitation for liberos and Ella is a great example of this.

When it comes to the height of liberos, the only issue is players occasionally being too tall to play the position well!

Admittedly, 4’11” might also be too short for most liberos even, as it’s much harder to cover the court adequately when you take up such a relatively small space.

But Ella makes it work so you can too!

Check out this article for more information regarding the height requirements of liberos.

Jem is also a Filipino player who has been playing in the PVL for almost 10 years.

Although she’s quite a bit taller than Ella, since she’s a setter she is considered particularly tiny.

When it comes to the height of setters, being tall is extremely valuable since it allows you to run a 5-1 rotation as opposed to the more predictable 6-2 offense.

Jem is definitely one of the more experienced PVL players who’s currently signed with the Choco Mucho Flying Titans.

Although she retired a decade ago, Yoshie Takeshita was one of Japan’s best ever women’s setters, despite her tiny stature.

Yoshie played over 100 games in the Japanese V.League and managed to rack up a huge amount of awards for her setting performances over the years.

She also played at the Olympics in 2012 where she won a bronze medal!

Yoshie is an inspiration. Not only did she make it to one of the highest levels of the game, but she also had a lot of success over the years, a truly great career.

Perhaps the most famous of the short volleyballers is Debbie Green-Vargas who got a lot of publicity at the time for always being the shortest player on the court.

A 1984 Olympic silver medalist, Debbie is widely regarded as one of USA’s greats when it comes to setting.

She has long since retired but there’s a surprisingly large amount of gameplay footage of her online!

Although the game of volleyball was quite a bit different back then, that doesn’t detract much from the prolific success Debbie had as a player.

Perhaps you’re aspiring to play college volleyball but are concerned about your height?

Below are 2022’s 4 shortest div 1 NCAA volleyball players, all of which are liberos or defensive specialists, and all of whom are 5’2″.

As we move down to division 2, there’s a couple players coming in at just 5’1″ tall…

And in div 3, we have Gina Custer who is a 5′ tall senior defensive specialist.

Even though she’s just 152cm tall, Gina is a solid libero who has excellent skills.

When it comes to beach volleyball, height is significantly more important than indoor.

When there’s just two of you on the court, there’s a lot more ground to cover and that becomes a whole lot easier the longer your legs are!

That’s why it’s no surprise the beach players on this list are slightly taller than the indoor players, each of whom are 5’5″ and play in either the NORCECA, FIVB, or AVP federations, all of which have legit pro beach tours.

How Can These Women Compete In The Tallest Sport In The World?

So what exactly makes these ladies the exception to the rule that you’ve got to be tall to play volleyball?

Firstly, you’ll notice that the 2 PVL players, Ella and Jem, are competing in the Filipino league where the average height is much lower than elsewhere in the world.

When your opposition are less likely to be 6’3″, you can definitely get away with being on the shorter side yourself.

The same goes for Yoshie, the Japanese simply don’t have a ton of tall players, so height isn’t as much of a disadvantage playing in the V.League compared to internationally.

Having said that, Yoshie along with the Japanese national team, did have decent success against international opponents, in spite of their height!

They Picked Positions That Complement Their Height!

Also worth mentioning is that all of these players are either liberos or setters, which are the two best positions for shorter players!

When you’re not doing as much hitting or blocking, height is definitely less of a factor.

In all of these cases, the players got to the level they did through having exceptional skills.

For certain positions like middle blocker and opposite hitter, just being super tall goes a really long way. If you can figure out the basics of spiking and blocking, you’ll probably have decent success in volleyball…

When you’re short however, you have to rely on exceptional technical ability which is where each of these athletes have been able to shine!