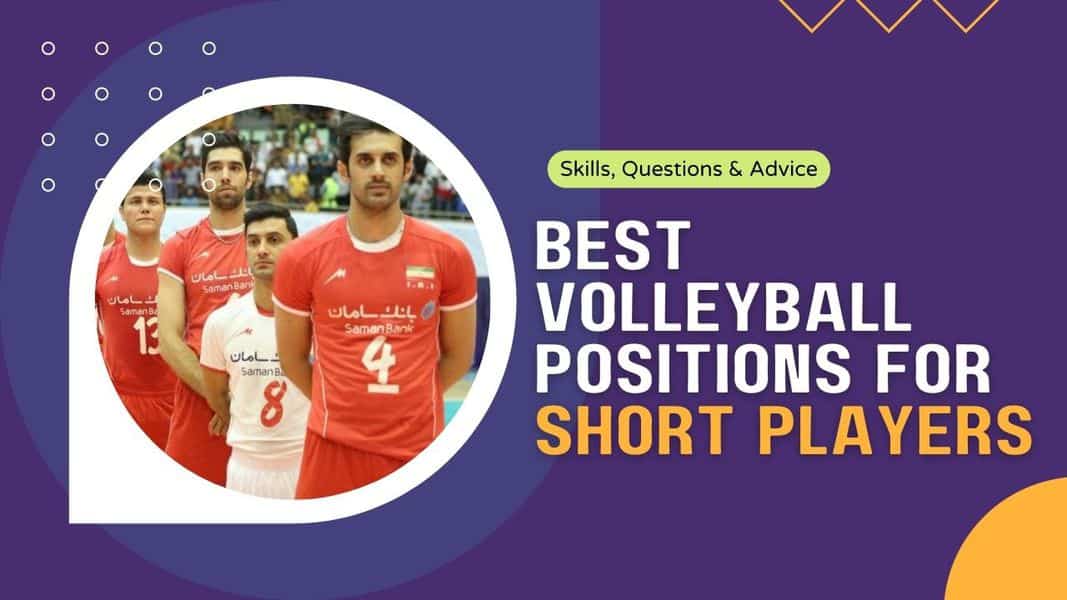 Volleyball is the tallest sport in the world for a reason… it really helps to be tall.

Having said that, not every position on the court requires a giant of a human being to play there.

The best volleyball positions for short players are libero and occasionally setter or outside hitter.

Firstly we’ll look to identify exactly how much of a handicap being short is in the sport of volleyball, and then we’ll explain the roles best suited to shorter athletes.

After that I’ll run through some practical tips on how to be more valuable on the volleyball court as a short player.

Can You Play Volleyball If You’re Short?

Nowhere is it writ in law that you can’t play volleyball if you’re short.

I’m sure you’re aware of that, but I want to make it abundantly clear right now that you can still succeed at the highest levels of the sport as a shorter athlete!

Check out this list of the 8 shortest female volleyball players in 2023!

You may never be a middle blocker or opposite, but we’ve seen some really short athletes play every other position on the court, so there’s no reason you can’t as well!

Having said that, understand that this sport just became exponentially more difficult for you to make it to the professional or Olympic level.

How Short Is Too Short For Volleyball?

While there is no minimum height for a volleyball player, if you’re really short, your only hope is to be an exceptional libero.

If you’re just playing socially you can probably play whatever position you like, but in any serious volleyball team you’ll be limited as to which positions you can play without hurting your team’s chances of winning.

The Best Positions To Focus On

Without a doubt you should be eyeing up the libero position as your first preference.

Your Best Bet Is Becoming A Libero

The libero plays only in the back row and is not allowed to spike the ball. This is punishment for being so short.

In reality, the libero is a very important position as the offense can only be built upon a strong defense/serve-reception.

Liberos need to be able to pass well, dig even better, and thus must be very agile.

Height doesn’t really factor into any of these responsibilities.

Do Liberos Need To Be Short?

It just looks that way when you see them on TV because they’re standing on a court full of giants.

Most of them are fairly tall actually.

The average men’s libero height is 185cm which is quite a bit taller than the average man!

If you’re asking whether being a 6’8″ libero is a good idea, you’d probably do better if you were slightly shorter!

Be sure to check out this article to read more about the height requirements of the libero position.

So You Want To Be A Pro Libero?

If you wanted to make volleyball your career as a short athlete, being an exceptional libero is really your only hope.

It just so happens that libero is the hardest position to make it in as a pro.

That’s definitely not to say you can’t do it, but you need to be the best!

Be sure to check out my full article explaining how much professional volleyball players get paid for more information as to why it’s difficult for professional liberos.

Can A Volleyball Setter Be Short?

This one really depends on what level of volleyball you aspire to play.

If you’re just looking to play social/club volleyball, yes you can definitely be short as a setter.

But in the big leagues, seeing short setters is becoming really uncommon.

The higher level you play, the bigger a factor height becomes as a setter.

On average, Olympic setters are 4 inches (10cm) taller than the liberos on their team.

There’s a pretty big difference between being 5’8″ and being 6′ when it comes to playing this position.

Having said that, Matías Sánchez of the Argentina national team is a professional setter at just 5’8″ (173cm), so it definitely can be done!

Just remember, if you thought it was going to be tough as a libero, it’s probably 10 times harder to make it as a short setter.

Can I Be An Outside Hitter If I’m Short?

But you better be able to jump ridiculously high!

The average height of an Olympic men’s outside hitter is almost 6 and a half feet tall! And they can jump!

So if you’re considerably shorter, you need some freakish jumping ability, or you simply won’t end up playing that high of a level.

As of about 10 years ago, Meriya Luis of Cuba had the highest spike height of any women’s volleyball player in the world of 339cm.

What made this so incredible was that she was only 175cm tall (5’9″) which is 3″ shorter than the current average Olympic women’s outside hitter!

Mireya is the perfect example of an athlete who didn’t let her height hold her back.

You probably won’t be able to jump as insanely high as she could, but you should try to get pretty close!

For more info on this, read my full article on the height of outside hitters.

In that article you’ll find plenty of other examples of short outside hitters who made it happen!

What Volleyball Skills Should I Develop If I’m Short?

If you’re planning on being a libero, you should spend as much time passing and digging as possible.

You should also do some setting as you’ll be required to step in and set the ball every once in a while.

If you want to play setter or outside hitter, you need to work extremely hard on your vertical jump!

There’s simply no way around it.

How Do You Spike When You’re Short?

If you have a low spike height, you need to be a lot more deliberate when it comes to where you spike the ball.

Since there’s little chance of you ever hitting over the block, you should practice aiming for the fingertips and going high off the hands whenever there’s a block.

Depending on your spike height, you may not be able to consistently hit sharp cross court angles, in which case you need to focus on hitting the ball into the back corners of the court as much as possible.

How Do You Block When You’re Short?

Technically speaking, there isn’t much out of the ordinary you can do here.

You can try swing blocking as much as possible and praying they don’t set the ball to the 205cm opposite who you’re matched up against!

At the end of the day, if you can jump really high, you will probably be fine!

By now it should be clear that being short as a volleyball player, although it’s a severe handicap, is not a death sentence if you aspire to play with the best in the world one day.

Being a libero is by far the best option, followed by setter and outside hitter.

My best advice to any short volleyball player who doesn’t want to be a libero is to focus all your energy on improving your vertical jump.

Being able to jump really high may be your only ticket to success in volleyball!

If you’re still not sure, be sure to check out my full article on how to pick your volleyball position.