The 5 Best Opposite Hitters In Volleyball In 2022 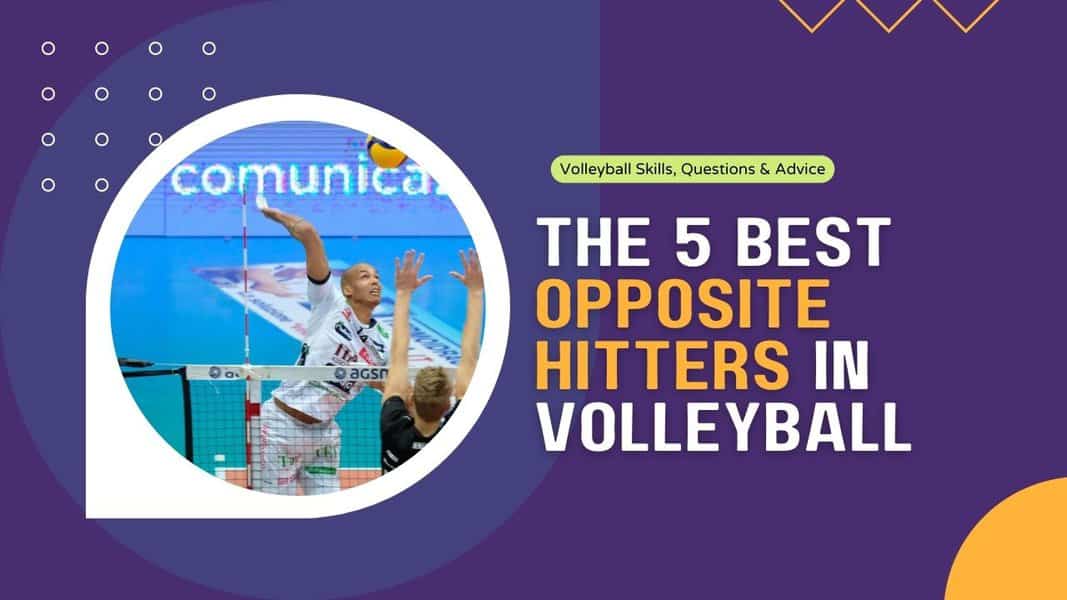 Today we’re going to look at the 5 best opposite hitters in the volleyball world, as I see it.

Total number of matches under their belt, consistency over the years, awards to their name, and current form are the main criteria I’ve used to compile this list.

Fun fact: we talk a lot about how opposite hitters benefit from being left handed, but every one of these gentlemen happen to be righties? Interesting coincidence.

Brazil’s de Souza has been one of the top performing opposite hitters for a long time now and he’s still absolutely killing it.

Aside from spending 1 year playing in Turkey, Wallace has spent his entire pro career in Brazil. He’s also won 2 Olympic medals with the Brazilian national team and has a stack of awards to his name.

When he went to play in Turkey during the 2020/21 season, he managed to take home best scorer and MVP at the Turkish Cup and last year he killed it at the Nations League.

With 300 or so matches under his belt, Wallace is approaching the top 10 ranked volleyball players of all time currently sitting in the 11th spot.

Netherlands’ Nimir Abdel-Aziz has one of the more interesting volleyball stories as he actually started his pro career as a setter before transitioning into the role of opposite.

The 30 year old is a bit of a vegabond having played professional volleyball in the Netherlands, Iran, Italy, France, and currently in Turkey for Halkbank Ankara.

Like Wallace, he’s also a righty, which isn’t so common in the position of opposite, but it hasn’t held him back one bit…

Nimir is currently in blistering form winning 14 of his 31 awards since the start of 2021, including best scorer, best spiker, best opposite, best server, and MVP!

In 2020 Nimir ranked as the 8th best player in the world and in the 2021 season he improved upon this to the top spot, beating out second place by 250 points!

As of right now he’s ranked 5th in 2022 so it’s safe to say Nimir is on an absolute tear in recent times!

This guy has one of the toughest jump serves in volleyball which helps him rack up points at a ridiculous rate.

One of the most famous players in all of volleyball, Kurek has cemented himself as one of the best opposite hitters of all time.

The Pole has had one incredible career having played in Poland, Russia, Turkey, Italy, and most recently, in Japan’s V.League where he’s enjoying his superstar status.

Kurek is currently 33 years old and 205cm (6’9″) tall, and has absolutely cleaned up in Japan over the past couple seasons, earning multiple best opposite and best spiker awards.

With a 370cm spike height, Bartosz is a freaky athlete capable of absolutely crushing the volleyball and he’s also right handed!

It’s kind of absurd to think that Kurek isn’t higher on this list because he’s possibly the most well known opposite to ever play, but just wait til you see who else is on this star studded list!

You might be thinking, wait, isn’t this guy a middle blocker? Well, yes and no.

Currently, Muserskiy identifies as an opposite hitter, which is why you didn’t see him in my list of 2022’s top middle blockers.

Russia’s 218cm giant Muserskiy has been one of the most dominant forces in all of volleyball for well over a decade now.

He’s currently ranked as the 9th best volleyball player of all time and is one of the most decorated, earning 40 awards throughout his career.

These days he’s playing his club volleyball against Kurek in Japan where he’s also been absolutely destroying his competition.

How do you even compete with someone who is 218cm and has a 375cm spike reach?

Having played most of his career as a middle blocker, Muserskiy, just like Nimir, had absolutely no issues moving to the role of opposite just before he started playing in Asia.

This is particularly impressive for a guy who literally towers over the game’s tallest athletes at almost 7’2″.

Most players this big don’t have the agility needed to hit from the wing as well as he’s been able to.

Even though he’s not been playing opposite for as long as other players, he deserves to feature highly on at least one of these top 5 lists.

Russia’s Maxim Mikhaylov is currently the top ranked volleyball player of all time.

Mikhaylov has had an unbelievable career with 3 Olympic medals and more awards than any volleyballer I’ve ever written about (44)!

He keeps somewhat of a low profile having played his entire professional career for just 2 clubs in Russia.

The Russian Superleague is known for being super physical and extremely competitive so to see Mikhaylov absolutely dominating even at the ripe old age of 34 is really impressive!

With such consistency over so many years and showing no signs of slowing down, it’s no wonder Maxim’s ranked as the top volleyballer (not just opposite) of all time!

Best Opposite Hitter In Women’s Volleyball In 2022

I didn’t think it would be fair to only discuss men here, so I’ve decided to include who I think is the top women’s volleyball opposite hitter in today’s game.

When it comes to women’s volleyball, the current top performing opposite hitter also just happens to be the GOAT!

The 196cm (6’5″) Serbian is one of the most physically dominant athletes to ever play the game.

With a 329cm spike reach, she’s taller and more athletic than a number of the top men’s volleyballers!

She’s been playing in the top professional league in the world (Turkey) for Eczacıbaşı Dynavit since 2015 so she’s climbed her way to the top spot battling it out against the best athletes in women’s volleyball.

It’ll be exciting to see how Tijana defends her crown as the top opposite in women’s volleyball over the coming years!