The 5 Best Middle Blockers In Volleyball In 2023 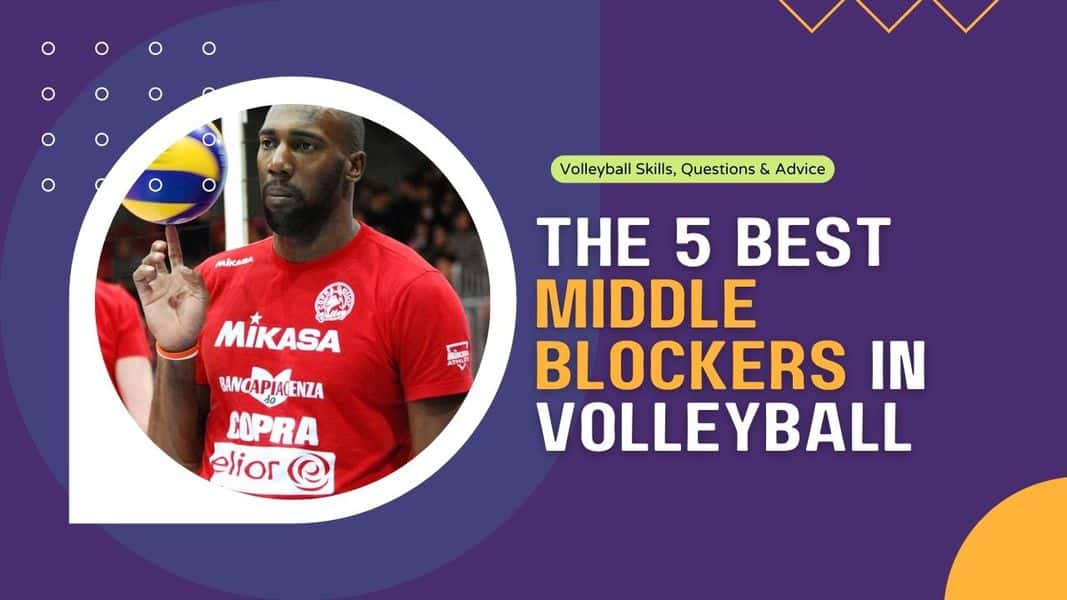 Middle blocker is the position I played when representing Australia at the junior level, so it has a special place in my heart.

But it’s definitely one of the least glamorous positions on the court, and very difficult to master.

I have ranked 5 of the current top middle blockers who have become well respected as some of the best to ever do it.

I used individual rankings as well as career awards to help me choose this list.

There was quite a few other guys that could easily have made my top 5, and it definitely wasn’t easy deciding who’d get that 5th spot!

So without further ado, I now present to you the best middle blockers on the planet!

Simone Anzani of Italy’s national team made it onto my list for his recent strong form in the 2020/21 season where he claimed several awards for best middle/blocker.

Anzani has been a force in Italy for a decade now and is only getting better with his most recent clubs being Lube, Modena, and Perugia – 3 of the top teams in the world.

Anzani definitely isn’t one of the most athletic middles the sport has ever seen, with a relatively modest 350cm spike height but he’s exceptionally consistent both offensively and as a blocker.

Anzani’s current team Lube won the Italian Superlega in the 2020/21 season where he received best middle blocker as well as best blocker awards.

Simone followed that up by winning the European Championships with the Italian national team in 2021.

Safe to say he’s definitely on a bit of a tear lately and I’m excited to see how he does for the remainder of 2023.

Srećko Lisinac is a middle blocker hailing from Serbia, a country very well known for producing some of the top middles in the world.

Lisinac may as well be known as a middle hitter instead of a middle blocker because of his extremely dominant ability to attack the ball.

He’s got a ridiculous 370cm spike reach, making him one of the more athletic and explosive middles in the game.

Lisinac’s jump serve is also one of his strong suits along with his ability to follow it up by hitting the pipe.

He had a career year in 2019 earning best middle after winning the European Championships.

He followed that up with best middle blocker and best blocker awards for the 2019/20 Italian Superlega.

Most recently he received the best middle blocker award at the 2021/22 Italian Cup.

Their kid is going to be one epic middle blocker one day coming from that pedigree!

Also from Serbia, on the opposite side of the middle blocking spectrum from Lisinac, is Podraščanin who is one of the most dominant blockers in today’s game.

Podraščanin is a veteran of the sport with over 400 matches under his belt and has been playing in Italy for the last 15 straight years.

Podraščanin is one of those ‘not so athletic’ middle blockers with only a 346cm spike reach but is a perfect example of why physicality isn’t everything.

He is living testimony to the fact that you don’t need to be 215cm tall with a 380cm spike height to become one of the best the game has ever seen.

Teammate Lisinac, who is known for smacking balls straight down into the 3 meter line, is in many ways the complete opposite of Podraščanin who instead avoids blockers by aiming deep when spiking.

Both players get the job done offensively, but Podraščanin is ranked higher on my list for good reason and that’s primarily because of his superior ability to block.

He’s also been at the top of the sport for longer with a solid 5 years on Lisinac.

It’s great to see how two completely different approaches to the position of middle blocker can both be extremely effective.

One thing is for certain, I would not like to be matched up against either of these two Trentino middle blockers!

Member of the Brazilian national team, Lucas Saatkamp is one of the most accomplished middle blockers to have played the game of volleyball.

Standing at 209cm (6’10”) tall, this 36 year old has spent his entire club volleyball career in Brazil (bar the year he played for Modena in Italy).

Despite his height, Lucas also falls into the ‘not so athletic’ camp with just a 340cm spike reach. He is another perfect example of how this metric often means very little.

His ability to run a massive variety of plays from all over the court with amazing efficiency proves yet again that technical ability is more important than athleticism for this position.

With no shortage of talent in this position on the Brazilian squad, the Bruno/Saatkamp setter/middle combination has been one of the most effective partnerships of all time.

Saatkamp won 2 best middle blocker awards in the 2020/21 season proving he’s still a force to be reckoned with even as the oldest athlete on this list.

Well and truly at the top of the mountain when it comes to middle blockers is Robertlandy Simón of Cuba.

Simón is to middle blockers what Wilfredo Leon is to outside hitters… the GOAT. At least if we’re no longer counting Muserskiy as a middle, that is…

This 34 year old superstar is 208cm (6’10”) tall and has recently started playing for Volley Piacenza in Italy after finishing up with Lube.

Known for his incredible horsepower when spiking and serving, Simón has a stack of awards more than twice as long as most players’ on this list.

He has won the award of best middle blocker at the Club World Championships for the last 4 years consecutively which is a ridiculous achievement and proves he’s got years on the clock still.

When we talk about physicality, not only is Simón one of the tallest and heaviest middles in today’s game, but according to some sources he’s also got a 387cm spike reach which is quite literally out of this world…

Robertlandy is the current top ranked middle of all time and it’s looking like he’ll hang onto that title for a long time to come.

Not to forget about the ladies, this one was a lot easier.

Menezes has spent her entire 22 year career in Brazil (except for the one season she played in Istanbul) and has completely dominated the Brazilian league for many of those years.

The 34 year old Brazilian is 196cm (6’5″) tall and currently plays for Itambé Minas in Brazil.

She may well be the recipient of more awards than any other middle blocker in the history of the sport!

And she’s not slowing down, receiving 7 more awards since the beginning of 2021.

Menezes, like Saatkamp, isn’t a crazily athletic high flyer with just a 320cm spike reach, but her technical ability is quite simply second to none.

Shout out to Turkey’s Eda Erdem Dündar who came in at a very close second place.

To learn what it takes to make one of these lists, be sure to check out my list of elite middle blocking tips!