How Tall Are Outside Hitters In Volleyball? 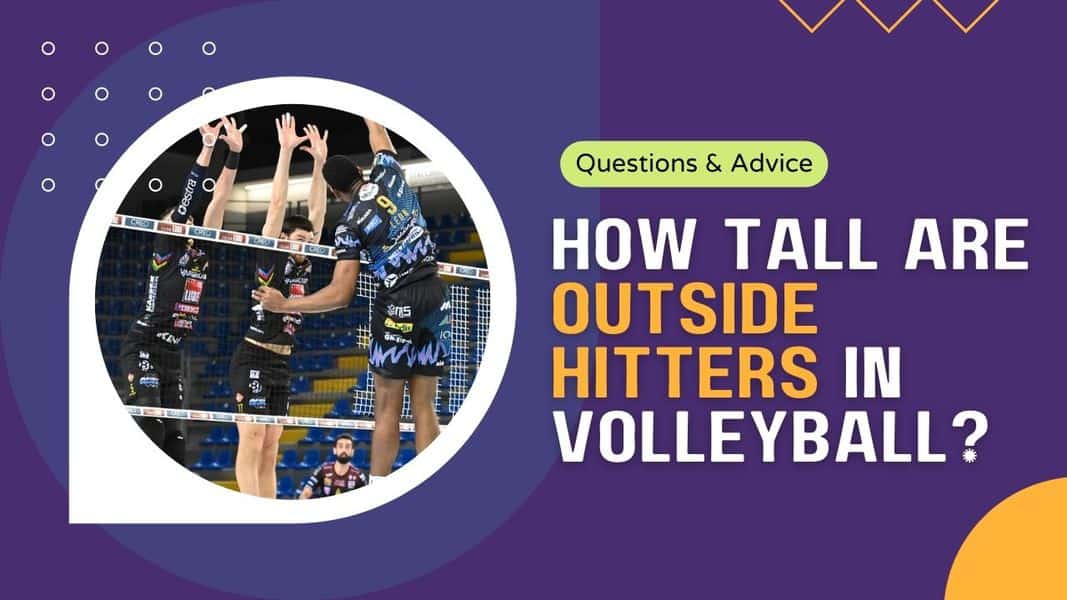 Since they’re often the go-to spiker on a team, outside hitters benefit greatly from being tall.

Having said that, they’re usually quite a bit shorter than the middle blocker or opposite hitter…

So exactly how important is height to an outside hitter?

Let’s take a look at the averages for various levels of the game, as well as some things you can do if you’re a vertically challenged outside.

What’s The Average Height Of An Outside Hitter?

Of course the answer to this question will vary based on which level of play we’re discussing.

Some of these numbers are really surprising!

Average Height Of An Outside Hitter Vs Other Positions

I knew that outside hitters were shorter than opposites and middles on average, but I was pretty shocked to see by how much!

What this shows is that outside hitters were on average 8cm (3″) shorter than opposites and even shorter than middle blockers.

And they’re actually only slightly taller (2cm or .79″) than the setter…

I guess this is good news for those not so tall outside hitters out there!

Average Outside Hitter Height In The Olympics

At the highest level of the game outside hitters are slowly getting taller each year.

This is based on the height data from the 2012 Olympics as well as some numbers from the 2019 world cup rosters.

Below we’ve got the average height for men’s college volleyball outside hitters as per the NCSA website.2https://www.ncsasports.org/mens-volleyball/recruiting-guidelines

How Important Is Height For An Outside Hitter?

Exactly how tall does an outside hitter really have to be?

We’ve already established that on average outsides can be a lot shorter than opposites and middles, so it would appear that height plays a less significant role for this position.

If you’re really tall, your natural gifts might actually be more suited to the opposite or middle blocker position.

How good are you at passing?

If you’re an excellent passer and really tall, then you’ll probably make a magnificent outside hitter!

In this case, I’d recommend continuing to practice as an outside as it’ll be much easier to transition to opposite or middle than it will the other way.

How Tall Do I Need To Be To Play Outside Hitter?

If you’re an exceptional jumper, you might do well at just 6’3″.

If you’re any shorter than 6’3″, you’re basically looking at being a setter or libero.

There is a few exceptions to this rule which we’ll take a look at shortly.

For women, you’re realistically looking at 5’11” or more.3https://www.athleticscholarships.net/volleyballscholarships.htm

If you want to play D1 volleyball or score a professional contract, realistically you’re going to want to be 6′ or taller.

Having said that, the average height of women’s Olympic outside hitters was only 6′ in 2012, so if you’re close to this figure, you’ll probably be fine.

Shortest Outside Hitters In Volleyball

Every once in a while there’s an extremely talented outside hitter who completely defies these benchmarks and makes it happen while being significantly shorter.

These athletes also defy gravity with their massive vertical jumps which allow them to compete at the highest levels.

Let’s run through a few of the standouts.

Representing Spain’s national team, this guy is only 178cm tall (5’10”) but has a ferocious 344cm spike height!

In my opinion, Meriya Luis of Cuba is the most exciting jumper in the history of volleyball.

At just 5’9″, she was able to compete at the international level as an outside hitter because of her incredible athleticism.

Protopsaltis is a professional volleyball player from Greece who’s known for being incredibly smart and tactical, despite being shorter than a lot of liberos!

Some sources say his spike reach is just 325cm and others say it’s 340cm. Either way it’s plenty enough for him to have made it all the way to the top of the sport!

How To Succeed As A Short Outside Hitter

If you’re not quite as tall as you would like to be, but still want to pursue a front court position in volleyball, there’s a few things you can do to stand out.

They may seem kind of obvious, but these are the 3 most important things to focus on.

The one thing all short outside hitters have in common is that they’re able to jump extremely high.

You can’t control your height, but you can spend a lot of time working on your vertical jump.

If you’re a shorter outside hitter, be sure to check out my full article on how to jump higher in volleyball.

I’d recommend heading to YouTube and watching a few videos of how Athanasios Protopsaltis hits the ball.

He’s incredibly nuanced with how and when he uses power.

He’ll often use tips, rolls, and skillfully push the ball off the block.

You’re never going to be able to hit over the block, and you probably won’t hit incredibly hard (shorter arms means less leverage for power), so it’s imperative you choose your shots wisely.

You can also run faster attacks…

By running fast paced 2nd step offenses like a Go, you’ll often be able to hit the ball before the blockers have had a chance to get into position fully.

An outside hitter is often referred to as a passer hitter. There’s a good reason for that…

Since you’re less likely to be a stand out player offensively, shorter outsides should ensure their passing skills are top shelf.

Your goal is to be the most valuable asset you can when on court.

Height is something you can’t control, but you have full control over how much time and effort you put into mastering the skill of passing.

The outside hitter is typically the shortest offensive player in volleyball.

In order for them to compete effectively, they need to be able to pass well, jump high, and execute with precision when spiking.

Shorter volleyball players who have no interest in being a libero or setter are best suited to the role of outside hitter.

If this is you, be sure to work on improving your vertical jump as well as technical skills to compensate for your lack of height.