How Tall Are Middle Blockers In Volleyball? 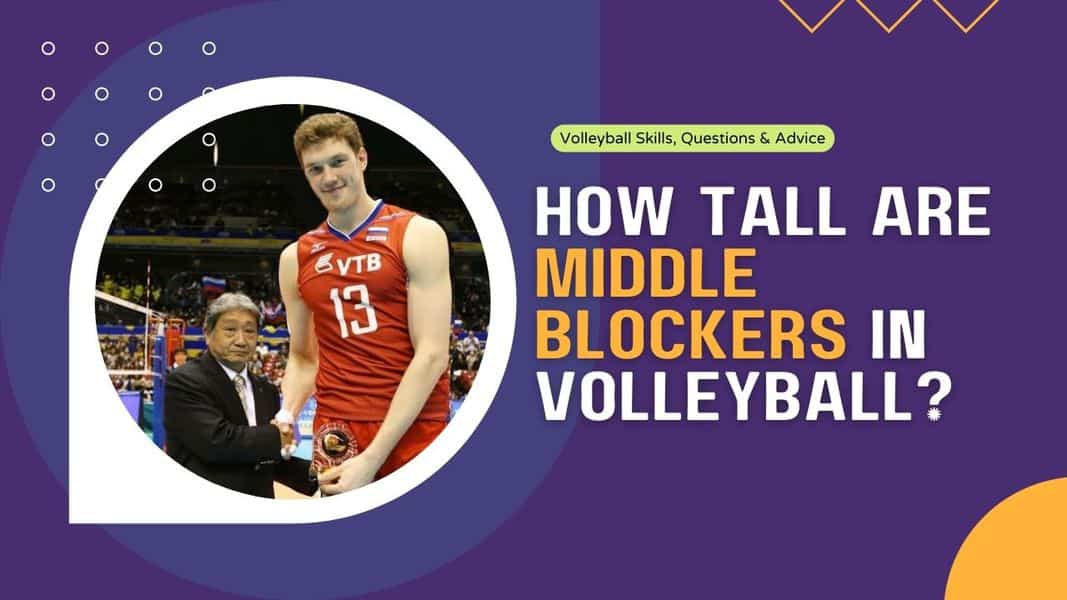 If there’s one position on the court that gives volleyball its title of the ‘tallest sport in the world’, it’s the middle blocker.

This is a position where height is extremely important for reasons we’ll get into shortly.

As a former international level middle blocker myself, I understand on a very deep level how big of a deal height is to this position.

Let’s take a look at the averages for various levels of the game so you can get a better feel for whether you should even think about pursuing the position of middle blocker.

What’s The Average Height Of A Middle Blocker?

This number varies a fair bit based on gender and whether we’re talking about college or professional volleyball.

Average Height Of A Middle Blocker Vs Other Positions

In almost all circumstances, the middle blocker will be the tallest player on court.

Very occasionally you’ll see a freakishly big opposite hitter who is slightly taller, but it’s not so common.

Middles Can Be Shorter At The Youth Level

When I played middle blocker for Australia at the youth level, our setter and opposite hitter (who both play professionally in Europe now) were significantly taller than me.

There was even a few rotations where I, the middle blocker, was also shorter than our outside hitter…

This will happen a lot more often at the youth/junior level but when we’re talking senior volleyball, it simply doesn’t happen.

The reason for this is because skill and coordination (i.e. actually being able to play the position well) is much harder to come by than just sheer height.

Junior level teams often want players that’ll help them win games and so they’d rather select a 6’5″ middle who can do a good job over a 6’9″ kid who can barely control his own body.

At the senior level, everyone’s really skilled, so it’s a lot less common.

What this shows is that middle blockers were on average just 1cm (0.4″) taller than opposites and around 4″ taller than setters/outside hitters.

As you can see, middle blockers don’t usually tower over everyone – they’re often a very similar height to the opposite hitter.

Together, these two players should tower over everyone else!

This is one reason it’s common to see slightly undersized middle blockers change position to opposite – they might be slightly too short to play middle, but just tall enough to cut it as an opposite.

At the highest level of the game middle blockers are slowly getting taller each year.

The average height of an Olympic men’s volleyball middle blocker is 206cm or 6’9″.

This is based on the height data from the top 4 teams at the 2012 Olympics.

I also looked at the top 5 tallest players on the 2019 rosters for 6 different teams and found the average to be 207cm.

Since some of those players would be opposites and since there was no Asian teams in the final 4 at the 2012 Olympics, it’s safe to say the actual average height of an Olympic middle blocker in 2023 would be closer to 207cm or 6’9.5″.

Below we’ve got the average height for men’s college volleyball middle blockers as per the NCSA website.2https://www.ncsasports.org/mens-volleyball/recruiting-guidelines

How Important Is Height For A Middle Blocker?

Trust me, the last thing you want is to be a slightly-too-short middle blocker!

As mentioned earlier, I played middle for Australia as a youth athlete and was often the shortest player in the front row.

At the end of our tour in Iran, the coaching staff sat me down and said I’d never make the senior national team as a 196cm middle. It just doesn’t happen.

I’d played middle blocker almost my whole career up until then because in most teams I was one of the tallest players and I was really good at playing that role.

But at the highest level of the game, everyone’s really good and they’re a lot taller too!

I always recommend to young players who aspire to play professionally one day, unless you’re freakishly tall or envision you will be one day, try to stay clear of the middle blocker position.

If you focus your time and effort on outside hitter or even opposite, you’ll be less likely to be limited by your height if you don’t end up as a giant.

How Tall Do I Need To Be To Play Middle Blocker?

To be quite honest, unless you’re exceptionally skillful, 203cm would be a pretty undersized middle blocker in today’s game.

If you’re any shorter than that, even if you were super athletic and could jump high, unless you have freakishly long arms, you’ll be up against it big time.

Block Speed Is The Main Reason You MUST Be Tall

The reason for this is to do with blocking speed.

When a 210cm guy stands at the net with his hands high, ready to block, it’s only a short distance to go from there to blocking the opposition middle.

On the other hand, if you’re 200cm, you’ve got to move your body 10cm further into the air (probably further because your arms will likely be shorter) to make the same block.

That’s a big disadvantage you can’t make up for with jumping ability because it’s to do with reaction time – how quickly can you get your fingertips high enough to block a quick attack.

If you’re any shorter than 6’8″, you’re basically looking at being an opposite or passer hitter – and you best be able to jump!

For women, you’re realistically looking at 6’1″ or more.3https://www.athleticscholarships.net/volleyballscholarships.htm

If you want to play D1 volleyball or score a professional contract, realistically you’re going to need to be 6’1″ for the same reasons I mentioned above.

If you’re not quite there, you can still do some serious damage in other positions as a 6 footer, so if I was a 6’0″ women’s middle, I’d look to switch positions ASAP.

What Should You Do If You’re Not Quite Tall Enough?

The middle blocker position isn’t like outside hitter or setter where you can make up for a lack of height with incredible skills and jumping ability.

The main reason for this is as I described above, you simply need that length to set blocks quickly.

Changing Position Is Your Only Hope!

For this reason, if you’re not going to reach 6’8″ as a male or 6’1″ as a female volleyballer, the best thing to do is to change positions.

The sooner the better.

This is particularly difficult if you’re a 6’6″ guy or 6′ gal and your high school, club, or college team wants you to play middle because you’re way taller than the alternatives.

But if you aspire to make it to the top of the sport, you should simply refuse to play middle blocker in order to get more experience in as an outside hitter or opposite, or even setter!

I would much rather be a 19 year old 6’6″ outside hitter who can’t pass or hit for crap, than a gun middle blocker – because I can still learn how to become a great passer and smart attacker.

I can’t learn how to become an elite middle blocker at 6’6″, because they don’t exist.

But only a very small percentage of the population will ever be able to play middle blocker at the professional/international level of the game.

The reality is that you need to be at least around 203cm as a man or 186cm as a woman to even think about pursuing this role at the elite level.

Vertical jump height and talent alone won’t help you compete as an undersized middle because you’ll simply never be able to get your hands into position to block quickly enough.

Unfortunately this precludes most of us from playing middle blocker more than just recreationally.

Luckily there’s plenty other positions for the rest of us humans to have a crack at!