Are Volleyball Shoes Good For Running? 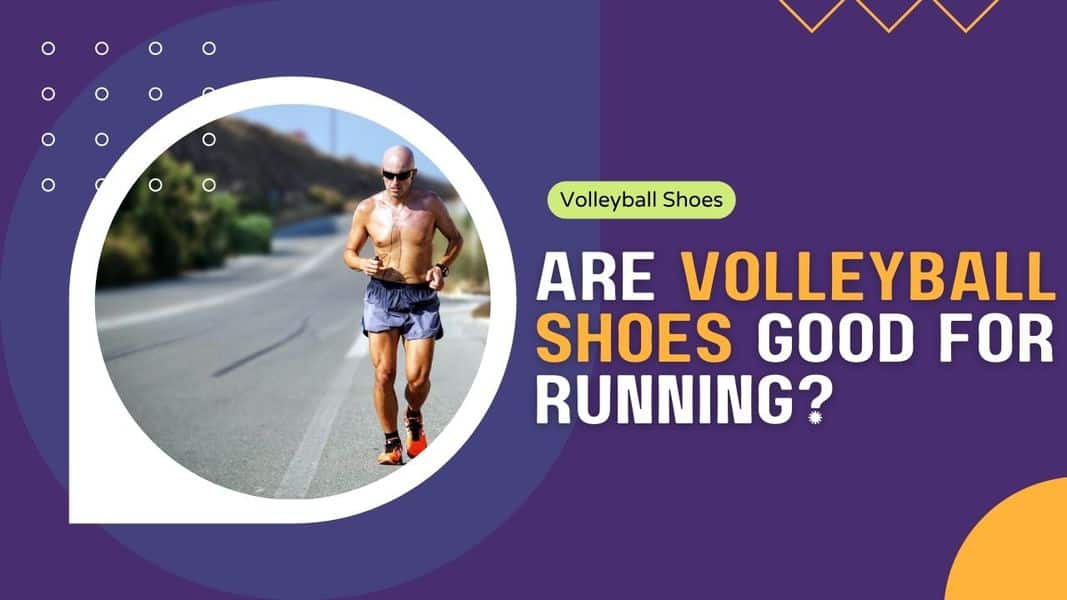 If you’ve just bought a brand new pair of volleyball shoes, you might be wondering if it’s a good idea to go running in them or not.

Volleyball shoes are not ideal for running as they’re specifically designed for high impact movements (like jumping and change of direction) on indoor courts, as opposed to outdoors use.

Not only will running outside wreck your volleyball shoes, but they will also become uncomfortable to run in as the traction and cushioning systems differ quite a bit from running shoes.

This is only logical is running increases the heart rate which also increases perspiration.

As you can see, running shoes tend to have more breathable mesh uppers with better ventilation.

Many volleyball shoes have quite poor ventilation with thicker plastic to add more lateral support.

The outsole designs are also quite different.

Running shoe outsoles are designed using a harder material known as carbon rubber which is better at weather the elements.

You’ll also notice that the outsoles of running shoes have deeper flex grooves which allow for a lot more forefoot flexion.

Volleyball shoes have significantly less need for forefoot flexion as they’re only being used on a very flat surface.

This is because running shoes have lighter cushioning systems and less padding around the midsole and upper compared to volleyball shoes.

As mentioned, the carbon rubber outsole of a running shoe is specifically designed for outdoor use on a variety of surfaces less forgiving than a court.

If you use volleyball shoes outside, the tread on the outsole will begin to fray very quickly.

Why You Should Avoid Wearing Volleyball Shoes For Running

Because your shoes will be heavier and clunkier, you’ll be a lot less efficient when running.

You’ll haven worse grip on the road or footpath and your feet will feel uncomfortable on uneven surfaces like trails and cross country tracks.

Your feet, socks, and shoes will all be sweatier and smellier after running in volleyball shoes (as opposed to running shoes).

Your Volleyball Shoes Will Get Wrecked

The rubber on the bottoms of most volleyball shoes will quickly start to fray the more you use them off the court.

A pair of volleyball shoes that could last you 2-3 years or more if looked after well will probably be ready for the bin after just 1-2 years.

Volleyball shoes are expensive! You should take care of them!

I never wear mine when not on the volleyball court and always bring a spare pair of shoes just to walk from the stadium to the carpark!

Can You Use Volleyball Shoes For Working Out?

It depends what you mean by working out…

If you’re just in the gym doing general fitness stuff, I’d say this usually won’t be a problem.

If you’re lifting (i.e. deadlifts or squats), I’d recommend taking them off and going barefoot.

The thick midsole will make you too high off the ground to perform either of these lifts efficiently.

At The End Of The Day…

It’s completely up to you whether you want to run in your volleyball shoes or not.

If it helps, I think it’s far more acceptable to wear volleyball shoes for running than it is to wear running shoes for volleyball.

You might be perfectly okay with wearing them out quickly and you might not care too much about optimizing your running performance.

If you’re almost due for a new pair of volleyball shoes anyway, you can afford to not take such good care of them.

If it is time for a new pair, read my article on the best volleyball shoes money can buy in 2022.

And when your new pair of kicks arrives, take good care of them!