The 5 Best Liberos In Volleyball In 2023 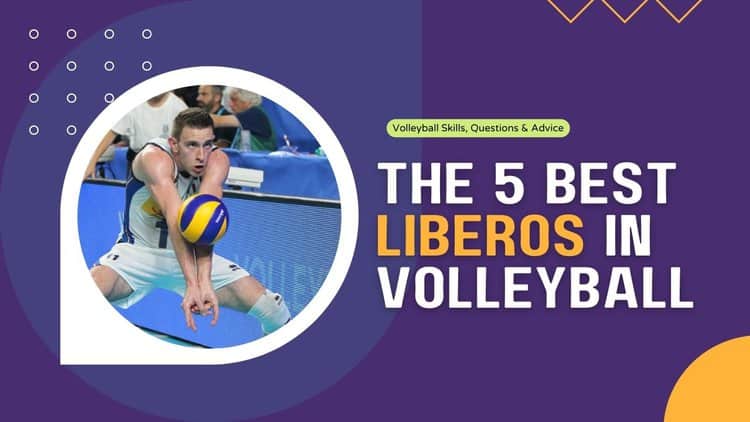 Today we’re going to look at the 5 best liberos in the volleyball world, as I see it.

This was a pretty tough list to put together because we don’t have as many stats as we’d like such as passing and dig percentages.

As such, this list is based upon overall historic/career performance as well as current performance.

Total number of matches under their belt, consistency over the years, awards to their name, and current form are the criteria I’ve used to compile this list.

Coming in as the fifth best libero in the world in 2022 is Russia’s Velentin Golubev.

Golubev has played his entire professional career spanning a bit over 10 years in Russia where he’s been a super solid performer, particularly in recent years.

In the 2019/2020 season he managed to get a best digger and best libero award for his performances in the Club World Champs as well as the Russian Cup.

The year before that he also won best libero at the Challenge Cup.

With north of 300 matches under his belt, Golubev is definitely one of the more experienced liberos in the game today.

Fabio Balaso is an Italian libero who has also played his entire pro career in his home country.

He currently plays for Lube where he has been for the last 4 seasons.

Having played just shy of 300 professional games, Balaso is also one of the more experienced liberos in today’s game.

At just 26 years of age, Fabio appears to be really coming into his prime years as a libero.

In 3 of the last 4 years, he’s finished up ranked in the top 20 players in the world and he has a slew of awards to show for it.

To be precise, he’s earned 7 awards since the start of 2021 for his exceptional performances as a libero.

If Fabio keeps up this incredible form, there’s no reason he can’t move further down this list to establish himself as one of the greatest to ever do it!

Erik Shoji is a Team USA libero who has had an epic career playing all over the world: Germany, Austria, Russia, Itality, and currently in Poland.

At 32 years old, Shoji has played almost 300 matches and is still racking up awards with his most recent being ‘best digger’ at the 2021 Olympics.

Digging excellence is something that describes Shoji well. He’s known for his incredible speed and ability to chase down and dig volleyballs most won’t get close to.

At just 184cm tall but with a 330cm spike reach, it’s no surprise that this man is as explosive as an athlete as anyone else on the court.

Erik also recently created a YouTube channel where he has quickly amassed a huge following reacting to all sorts of different volleyball related topics.

His presence on YouTube has allowed his personality to shine through to his audience and it’s also given fans a behind the scenes look at how professional volleyball players think about certain aspects of the game.

Although Erik is unequivocally one of the best liberos in today’s game, he’s probably the most popular (at least in the west) because of the fact that he plays for Team USA as well as his online presence.

Having said that, his Polish club team has recently been crushing it as well!

Part of me thinks Shoji’s YouTube channel was created as an avenue for him to transition into after he retires, but I’m sure his fans would love to see him continue playing for years to come!

Poland’s Pawel Zatorski is widely considered to be right up there with the very best liberos on the planet.

It’s been a long and fruitful career in which Pawel has racked up over 365 matches, making him one of the more experienced liberos on this list.

One might argue that the likes of Shoji, despite having played less games, is more experienced having played in 5 different professional leagues.

Nonetheless, Zatorski has well and truly mastered his craft and has been earning ‘best libero’ awards for over a decade now.

The libero position has only been a thing for 25 or so years, and in that time Zatorski has well and truly earnt his place as one of the best to ever do it.

With 2 World Championship gold medals to his name, Zatorski has been a big part of Poland’s success on the international stage.

With a few liberos on this list right around the same age as Zatorski, it’ll be interesting to see exactly where on this list these players finish once they retire.

My bet is that Zatorski will hang onto the second position for years to come!

When we talk about legends of volleyball, you often hear names like Wilfredo Leon, Robertlandy Simon, Bruno Rezende, Maxim Mikhaylov, and Dmitriy Muserskiy…

When it comes to liberos Jenia Grebennikov of France is without a doubt the GOAT.

I should mention this wasn’t really close either… Grebennikov is, by a big margin, the best libero ever.

At just 31 years of age, Jenia has racked up over 500 matches to his name, making him by far the most experienced player on this list.

Having started playing in France, he has also played in Germany and Italy and he now plays for Zenit St. Petersburg in Russia.

Jenia literally plays by his own rules and uses different techniques to most liberos.

He’s well known for defending much closer to the attack line than where most liberos will stand when defending in their first base position.

He also adopts an extremely upright stance when digging.

It makes sense that he does things differently…

One of the craziest things about Jenia is that he’s got a 348cm spike reach at just 188cm tall, giving him an absurdly large vertical jump.

He’s even recently played a game as a wing spiker for his St. Petersburg team!

Will we ever see a libero as good as Jenia again? I wouldn’t be surprised if we didn’t, especially since his approach seemed to go against all the conventional coaching wisdom of how to play this position.

Best Libero In Women’s Volleyball In 2023

This was a pretty tricky one to decide because there’s two women’s liberos that really stand out in today’s game.

I want to give a massive shout out to Brenda Castillo of the Dominican Republic who almost got my top place for women’s liberos.

I’ve never seen a player with more than 50 or so awards, but Brenda has a whopping 94 awards to her name!

While she’s an absolute beast and will quite possibly one day take the throne, I had to give the award to someone else…

Liberos the world over look at Monica De Gennaro as the best libero in today’s game.

The 35 year old Italian has played her entire career in Italy and is still in red hot form having earned 6 best libero awards since the start of 2021.

The Italian professional league is one of the toughest women’s leagues in the world, so for Monica to have not only thrived but absolutely dominated that arena for so long is why she’s ranked in the top spot.

Monica being the best isn’t just my opinion, but also the opinion of other volleyballers much closer to the action than I am…

To me, De Gennaro is the best in the world. There are several others I love, such as Brenda Castillo and Silvija Popovic.

I’m sure as Monica approaches retirement, Brenda Castillo will soon take the crown as queen libero, but until then, Monica reigns supreme!

If you want to learn how to defend like these elite liberos, be sure to check out my top 10 expert libero tips!