Volleyball Base Positions – Explained (With Diagrams) 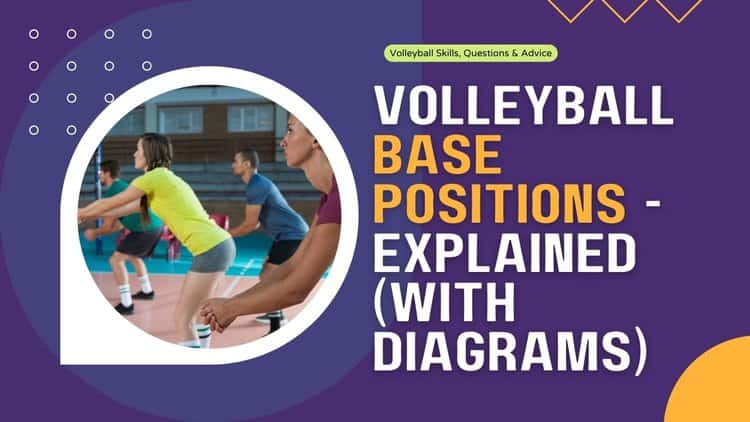 The term ‘base positions’ refers to the locations on court each different position defaults to whenever the ball crosses the net to the other side.

Often called base defense or home defense, the idea here is to position each player in the best possible spot to be able to block or dig an attack from the opposition.

Having a firm understanding of base positions allows teams to prepare for the ball returning over the net either via overpass, setter dump, quick attack, or spike.

In this article I’m going to explain, using diagrams, the base positions for each of the various types of players on the volleyball court.

When To Move Into Base Positions

Players should move into their base positions,

When the middle blocker is in the front row, their base position is in 3, meaning they want to be right up on the net directly in the middle of the court.

They should be standing in the ‘ready position’ with hands high on the net and knees bent, ready to block an attack.

Middle Blocker Back Row Base Position

Whenever the MB rotates from position 2 into into the back court (position 1), they’ll usually serve the ball before moving into position 5 to play defense (where the libero is above).

They’ll defend out of 5 until they lose the point, and then they’ll likely be replaced by the libero.

They’ll also have to be ready to dive forward and defend against tips.

Occasionally you’ll have the middle blocker defend out of position 6, where the OH is in the above diagram.

This will usually take place whenever the MB is a significantly better back row hitter and/or the OH is better suited to defending against short balls and tips.

The libero‘s base position will normally be position 5, but occasionally some teams will choose to put them in position 6.

If the libero is particularly good at defending laterally and backpedaling while the OH is a useless pipe hitter but great at defending short and covering tips, you might see the libero switch with the OH and play in 6.

However the vast majority of the time your libero will default to position 5.

The main reason the libero plays base defense out of 5 is because the opposition outside hitter will receive slightly more sets than their other attackers and they’ll hit cross court more often than line.

Essentially we’re putting our libero (best defender) in the position on the court where they’re likely to dig more balls than anyone else.

Where Exactly Should The Libero Defend?

There’s really no consensus on the exactly how deep or short you should stand when playing base defense in 5.

Most will suggest standing roughly 4 feet from the side line and 4 feet behind the 10 foot line.

But the greatest libero of all time, Jenia Grebennikov, often chooses to stand way further forward than most.

As you can see, he’s defending right up on the 10 foot line, whereas most liberos stand much further back.

But this approach might be one of the reasons why he’s significantly better at defense than other world class liberos.

How is Grebennikov is able to cover almost 50% more court than other elite liberos? Perhaps it has to do with him choosing a much further forward base position.

Outside Hitter Base Positions

The outside hitter’s base position when in the front court is in position 4, on the left of the MB.

When in the front row, they have to be ready to block the opposing opposite hitter whenever the ball gets set behind.

When the ball is set to the outside, the OH has to drop off the net and stand closer to the 10 foot line to defend against the sharp cross court shot or the tip.

The back court outside hitter’s base position will be in 6 the vast majority of the time and rarely in 5 (see libero section above for explanation).

They have to defend against deep spikes and balls that get hit high off the block.

Opposite Hitter Base Positions

When in the front row, the opposite hitter (often called right side hitter) defends in position 2 and is responsible for blocking the opposition outside hitter.

When the ball is set behind, the OPP has to drop off the net and stand closer to the 10 foot line to defend against the sharp cross court shot or the tip.

When in the back court, the opposite will defend in position 1.

The setter‘s base position in the front court is in position 2 where they’re tasked with blocking against the opposition outside hitter.

Of course they’ll also have to drop back to the 10 foot line to defend when the ball is set behind.

When the setter is in the back court, they must defend from position 1.

Position 1 makes the most sense as it’s the closest spot on the court to position 2 which is roughly where the setter will look to transition to in order to set from.

How To Teach Volleyball Base Positions

You first need to make sure each player knows what position they’re playing.

The easiest way to teach new volleyball players where their base positions are is to get 6 players on the court and slowly walk through each rotation, simulating a game situation.

Have players start in their serve receive positions and pretend that they’ve passed the ball successfully and spiked it over the net.

You can have younger teams practice shouting out “SWITCH” once the ball crosses the net, to remind everyone to quickly run to their base positions.

You don’t even need to use a live volleyball while doing this, it’s more about just practice moving around the court.

This is the ideal way to not only learn about base positions, but also to teach players where they need to stand on serve receive while learning either a 4-2 rotation, 6-2 rotation, or 5-1 rotation.