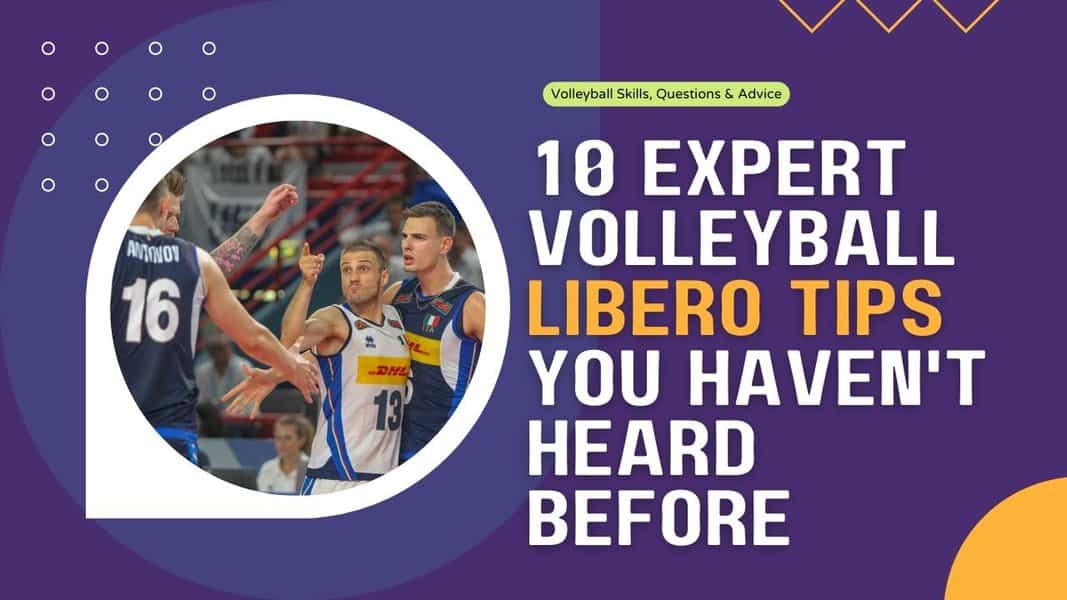 It is honestly really difficult to master the position of libero.

At times you’re having to make split-second decisions so quickly that you’re relying more on intuition and reaction speed than any sort of technical ability.

But there is plenty that you can do to become a better libero.

Today I’m going to share 10 things you absolutely need to be thinking about if you want to succeed on any level as a libero.

1. Shift Your Mindset: From Mistakes To Opportunities

Many liberos approach the game with a scarcity mindset.

They’re timid and afraid of making a bad pass or messing up a dig.

Team USA libero Dustin Watten believes this is an awful mistake that’ll do you absolutely no favors.

Instead he says that every time someone tips the ball, you need to view that as an opportunity for you to go and get an amazing dig.

You simply can’t afford to think of it as “oh no this is an opportunity for me to mess up”.

See every ball that comes anywhere near you as an exciting new opportunity to go and do something amazing for your team.

As a libero, you should be constantly taking mental notes about your opponents.

“Number 11, opposite hitter, likes to hit cross court and will only ever tip over the block when going line.”

“Number 4, left handed opposite hitter, loves to crush balls down the line and hits high off hands.”

Throughout each game you should be ‘writing down’ notes like these in your mind and adjusting your strategy as soon as you’ve got a new note in your mental pocketbook.

After that first note, you could alter your second base position/line defense strategy by pushing up right behind the block to cover the tip if you’re confident your opponent your opponent won’t hit the ball down the line.

With the second note, you could do the opposite and push back a bit defensively while staying close to the line, so you can get digs when the ball is hit high off the hands out the back of the court.

The best liberos are constantly trying to figure out every little detail about the opposition hitters.

By the end of a game, you should know what that guy ate for breakfast!

To be a great libero, you need to be mobile and limber.

You need to be able to get super low to the ground while remaining strong and athletic.

In the above clip, Ben Patrick (click through to see full video) is explaining how having mobility through the hips and lower back contributes to significantly better defensive positioning.

Having top tier ankle mobility will also allow you to get as low to the ground as possible while remaining upright and and agile enough to change directions.

When it comes to digging, being flexible is a non-negotiable because otherwise you simply won’t be able to dig/save as many volleyballs as you otherwise could.

When a ball is served in the seam between you and another player and you are 98% sure you’re going to go for it, there’s this decision process where you debate, even for just a split second, whether you’re actually going to go for the ball or not.

This is called decision fatigue and over time, it’s going to cause you to get sloppy.

If instead you simply said “I’m going to pass every single ball that I can possibly get to” well then your job is a whole lot easier. If you can get to it, you pass it. If you can’t, you don’t.

There’s no thinking, there’s no hesitation.

If a ball looks like it’s heading your way, regardless of how far it’s floating or spinning away from you, make an early decision to commit to passing that volleyball.

Even if that means you end up diving in front of the passer next to you to pass the ball, commit to it!

5. Model Your Approach After Jenia Grebennikov

When it comes to the best liberos in the world, no one is even close to being as good as Jenia Grebennikov.

This guy is leagues ahead of everyone else in terms of ability.

And he does things very differently to what most liberos are taught.

For one, he tends to defend far closer to the attack line than most players do.

The libero’s base position is usually a couple steps behind the line, but Jenia gets right up there super close.

He also manages to stay low but extremely upright when digging.

The guy literally does everything backwards and still manages to dig a far greater percentage of volleyballs than other top liberos.

It just goes to show that if you want to be in the top 1%, you can’t do the same things that 99% of people are doing!

6. Be Aggressive & Loud When Defending

He’s almost always the most vocal player on the court.

Even if it’s something simple like “mine” or “up” you should be as loud and commanding as possible when on the court.

This includes serve reception but mainly during defense.

In the following clip you’ll see Jenia move in front of his middle blocker to dig the volleyball.

Prior to that move, he absolutely screamed something indicating “mine” or that he was going to take that ball.

The reason this is so important is because as soon as Jenia vocalizes his intention, that middle blocker can immediately shift his focus to transitioning into offense.

You can see how the MB was focused on the ball initially and then decided to leave it alone.

If Jenia had been silent, the MB would be forced to stay in that defensive mindset for longer, until the ball had been dug, which would make him late on offense.

7. Become Better At Setting Than Your Setter

Okay that realistically isn’t going to happen, but as a libero you should always be the next best setter on court.

Quite often the setter won’t be able to get to a pass that has been shanked deep into the back court, in which case it’s your job to get to the ball and bump it into the perfect hitting window for your offense.

When the setter passes or digs the ball, if you’re going to step in and set, you don’t want to always just set a high ball to either wing.

This is predictable and unproductive.

If your offense is still ready to swing, you should be able to set them pretty close to the same tempo the setter would, so they have a better chance at beating the block.

Inexperienced liberos will always default to setting high balls when they have to take the second ball – but excellent liberos can effectively replace the setter and deliver almost the same type of set the setter would have.

It’s pretty clear that what separates elite liberos from the rest is that they’re dangerously fast.

Jenia Grebennikov has a 345cm spike height at just 188cm tall. This is ridiculous explosive power.

Same goes for Erik Shoji who is often thought of as the fastest libero in the game, he can jump pretty damn high too!

Everything comes down to being able to dig more volleyballs.

Ironically, the libero should be doing more explosive/plyometric exercises when in the gym that the players who are actually spiking the ball.

If you’re not naturally super speedy, you should be doing everything you can to increase that first step quickness because slow liberos simply get left behind.

At the highest level of the game, when hitters are spiking the ball at over 100km/hr, there’s virtually no time to react.

You essentially need to predict where they’re going to hit the ball and put your body in that spot before they’ve even swung.

As a defender, you should be looking at how the spiker approaches to hit the ball, where the set is placed, and where the block is in relation to the ball.

All within the span of half a second, you should be able to crunch that information and develop a ‘read’ as to where the ball is likely to be hit.

Use this read to deviate from your base position so you have a better chance of getting in front of the ball and making a dig.

One of the best ways of training this is to go through some HD game footage (or defensive highlights if possible) and try to imagine you’re the libero.

Play the footage back in half speed and try to guess what the best adjustment is based on the position of the block and the set.

Pause the video before the spike, write down/state your adjustment and why, and then hit play and see whether the move you would have made would have put you closer to being able to make a dig than the libero was.

If you go back to tip number 2 where we talked about player profiling, you can stack the player tendency information with the individual set/block configuration to make some really effective defensive adjustments.

The idea of using game footage is to get better at reading the play so that you’re better able to make these adjustments in-game.

This is one of the best ways to practice being a libero while at home with no ball!

10. Dig Way More Volleyballs Than Anyone Else

At a certain level, all liberos are really good at passing the volleyball.

What separates the best of the best is their ability to dig extremely well.

The single best way to become better at digging is to spend more time digging!

This is tough because you can’t exactly do a ton of digging by yourself and in some sense have to rely on other people to help you get reps in.

Even if you partner up with just one other player and have them hit down balls at you repeatedly, this is going to make a huge difference if you do it often enough.

Go to training early and ask a teammate to serve at you so you can practice passing.

Stay later than everyone else and force someone to hit volleyballs at you.

I guarantee you if you’re digging twice as many volleyballs as the next best libero in your area, you’re going to very quickly gain the reputation of best libero in town!