How To Run A 5-2 Volleyball Rotation (Full Guide) 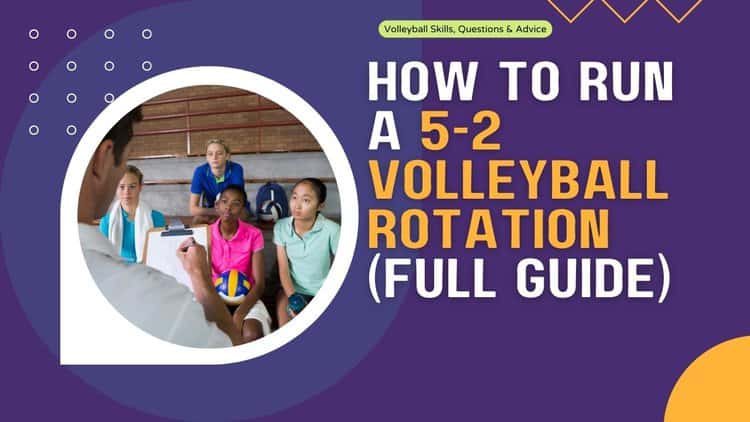 The 5-2 volleyball rotation is a very uncommon offensive strategy but one which can be quite effective in certain teams at the junior level.

This strategy involves using 2 alternating setters who sub in for one another: one sets from the front row only and the other sets from the back row only.

This strategy is primarily used in teams where you have two skilled setters: one tall and athletic who can block well (front row setter), and one much shorter who is a skillful setter, but are a liability when it comes to blocking and scoring points offensively.

The 5-2 rotation works the same way as the 5-1 rotation, except instead of one setter rotating all the way around the court, they play only half way around and sub out for the other setter.

In today’s article we’re going to take a look at exactly how this formation works as well as discuss why you might choose this strategy over something like a 6-2 rotation, 5-1 rotation, or a 4-2 rotation.

Advantage Of A 5-2 Rotation

First of all, why might you choose to run a 5-2 rotation? What is the primary benefit of using this approach over another?

If you have two or more really excellent setters on your team, the 5-2 rotation could be a good idea.

One solution is to run your tall athletic setter in the front court and switch them out for your short but super skillful setter in the back court.

In this sense, you’re getting the best of both worlds: a hybrid between a 6-2 and a 5-1 strategy.

Disadvantages Of A 5-2 Rotation

While the 5-2 rotation could be a good idea on some lower level volleyball teams, it’s definitely not ideal for most and certainly has some disadvantages, particularly for more experienced teams.

When you’re changing the setter every few rotations, this can make it difficult for setter/hitter partnerships to form and consistency will generally be lower.

This is less of an issue at the junior level where teams aren’t exactly utilizing back row hitters, and so each setter is mostly setting the same hitters anyway, but it becomes a limitation at higher levels.

It also means there’s a lack of leadership on court, since neither setter is out there long enough to assume much of a leadership role.

Less Substitutions Up Your Sleeve

When you’re subbing every few rotations, you might end up running out of subs towards the end of a set, depending on what the rules of your league are.

Reduced Hitting Options Half The Time

This is a disadvantage of both the 5-1 and 5-2 systems: whenever your setter is in the front court, there’s only two spikers, the MB and OH.

This isn’t so much of an issue at higher levels where players are capable of hitting from the back row, but in youth volleyball it can make your offense much more predictable from a blocking perspective.

Note that these rotations are identical to the 5-1 rotations: the only difference is that a substitution takes place as the back row setter moves from position 5 into position 4.

As that front row setter moves from position 2 to position 1, they’ll also be subbed off for the setter they had replaced earlier.

In this first rotation, the opposite hitter (AKA right side hitter) will actually hit from the left side of the court and the outside will hit from the right side.

An alternative approach to the first rotation would be to have the setter push the OH up to the net, taking them out of the passing line up, and having the opposite drop back to pass.

Generally you wouldn’t want to do this as your OH will usually be the better passer, but it’s nice to have this option up your sleeve.

When the setter is in position 6, they push right up into their base position, making sure to stay behind the opposite.

The front row outside hitter drops back to pass, making sure they stay in front of the libero.

When in position 5, the setter starts around the middle front of the court and is careful not to move in front of the MB or to the right of the back row OH.

The front row OH will drop back to pass alongside the back row OH.

An alternative here is to stack both the MB and OH in the middle left corner of the court, taking the OH out of the passing lineup and having the opposite step back to pass.

Again the only real benefit here is being able to control who’s in your passing lineup.

At this point, the back row setter is about to rotate into the front court and will be subbed off for our front row setter.

In this rotation the setter stacks with the MB in the front left corner of the court, allowing the OH to drop all the way back from the front right to pass in the back left zone.

The opposite mirrors the setter here and starts in the back right corner of the court. They’re careful to stay behind and to the right of everyone.

We now have only 2 front row attackers: the outside and the MB.

You’ll notice that our opposite hitter stays on the court the whole way around in a 5-2 rotation.

In the second last rotation, the setter starts right where we want them to be, the OH drops back to pass, and the OPP is pushed out of the passing lineup.

In the final rotation, the setter is already in their base position and the OH simply has to drop back to pass as usual.

The OPP has to stay to the left of the OH and will swing around to the right hand side of the court to hit from the back row.

After this rotation we’re right back to where we started from!

I’ve created a printable volleyball 5-2 rotation sheet which is just a single page PDF that contains the above diagrams.

How Do You Coach The 5-2 Volleyball Rotation?

The easiest way to teach the 5-2 rotation is to get your players on the court and simply walk them through each of the above rotations.

You could probably teach the entire 5-2 rotation in just 1 training session simply by slowly walking through it repeatedly for 30 minutes.

Make sure each of your setters understands how their rotations are quite different from each other.