How To Run A 5-1 Volleyball Rotation (Full Guide) 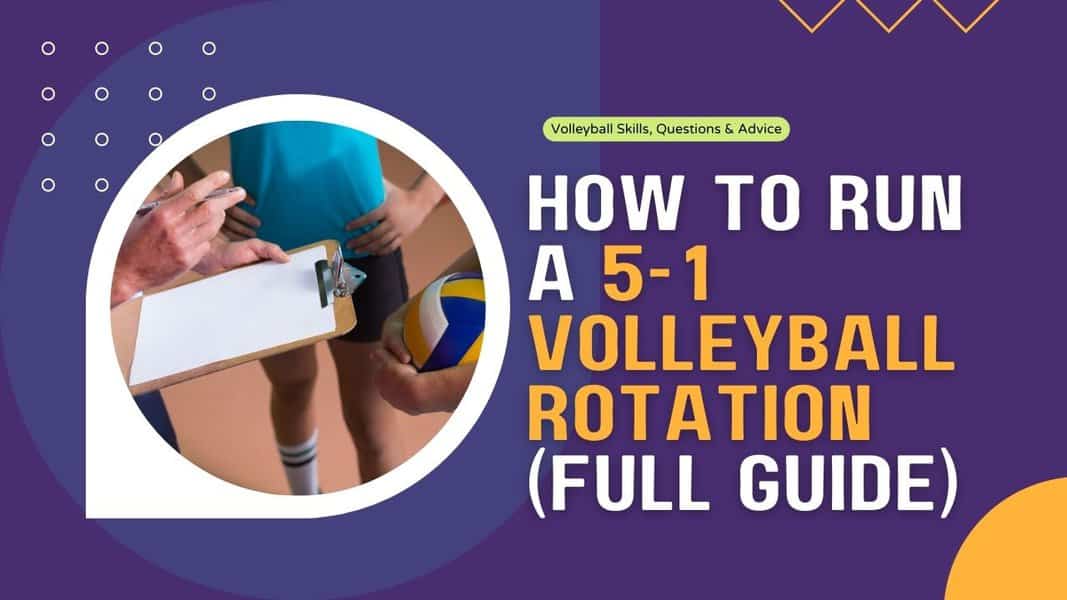 The 5-1 volleyball rotation is among the most popular offensive strategies in volleyball.

This strategy involves using just 1 dedicated setter who rotates around the entire court, setting in both the front court and back court.

This is one of the more advanced strategies and is typically favored by teams playing at the highest levels.

In today’s article we’re going to take a look at exactly how this formation works as well as discuss why you might choose this strategy over something like a 6-2 rotation or 4-2 rotation.

Advantages Of A 5-1 Rotation

First of all, why might you choose to run a 5-1 rotation? What are the primary benefits of using this approach over another?

Using A Single Setter Is Ideal For Many Reasons

Having just the 1 setter is far better than having 2 setters for a number of reasons.

When a spiker has been playing with the same setter for the whole game, they have a better understanding of exactly where the ball’s going to go and at what tempo.

Setters also play an important leadership role when on court so if you’re switching setters every 3 rotations (like you do in the 6-2 rotation), you’re going to lose some sense of direction and on-court leadership.

Better Use Of Talent

Using just a single setter is also optimal when you have 1 extremely talented setter.

If you’ve got a superstar setter, you want to keep that asset on the court as much as possible.

At the professional level, we’ve seen the 5-1 rotation enable organizations to build entire teams around a single setter.

The Setter Is An Offensive Threat In The 5-1 Rotation

Half the time the setter will be in the front court, which adds a whole different dynamic for the opposition to be aware of.

When in the front court, the setter will have the setter dump at their disposal, as well as a number of other ways to win points such as jousting at the net.

If you’ve got a tall, athletic setter, it can make the opposition blockers’ lives very difficult.

Do they attempt to block your setter or commit to your hitters and risk giving your setter an open look?

This might not be that much of an advantage, but when the setter is in the front court, there’s no front court right side hitter which gives the middle blocker plenty of room to run attacks behind the setter.

This makes it much easier to run slides and unorthodox combination plays.

More Subs Up Your Sleeve In A 5-1 Rotation

Since the setter stays in the game, there’s virtually no substitutions coming in and out of the game.

This allows teams to make use of a defensive specialist who can be subbed on for the opposite when they’re in the back court, provided they don’t need the offensive firepower.

If your opposite hitter happens to also be really talented at passing, it’s much easier for them to step into the passing lineup to replace the outside hitter in the 5-1 rotation.

This can be useful at times if your outside hitter is struggling to pass accurately, or if they’re just not that good of a passer to begin with.

In the 5-1, it’s easier to use your opposite as the passer hitter and have your outside as more of a spiking specialist.

Disadvantages Of A 5-1 Rotation

While the 5-1 rotation is most popular amongst professional volleyball teams, it’s definitely not perfect and certainly has some disadvantages, particularly for lower level teams.

When the setter’s the front row, there’s only 2 front row offensive options: the middle blocker and the outside hitter.

The opposite will hit from the right side of the court still, but they’re attacking from the back row and are often considered less of a threat.

Part of the reason the 6-2 rotation is better suited to younger, less experienced teams is because they really benefit from having 3 front row attackers.

More skilled teams can more effectively deploy the pipe or D (back row attacks) so they can make up for the reduced front row options by having more firepower in the back row.

The 5-1 Rotation Is More Difficult For Beginners To Learn

This rotation definitely takes a little longer to learn than the 6-2/4-2 because you have 6 serve receive rotations to learn as opposed to just 3.

In The 5-1 Rotation, Your Setter Has To Block

This isn’t necessarily a disadvantage, especially if you have a tall, athletic setter.

But for teams with shorter setters, they might really struggle blocking effectively when in the front row, as they’ll often be up against much taller outside hitters.

In this first rotation, the opposite hitter (AKA right side hitter) will actually hit from the left side of the court and the outside will hit from the right side.

An alternative approach to the first rotation would be to have the setter push the OH up to the net, taking them out of the passing line up, and having the opposite drop back to pass.

Generally you wouldn’t want to do this as your OH will usually be the better passer, but it’s nice to have this option up your sleeve.

When the setter is in position 6, they push right up into their base position, making sure to stay behind the opposite.

The front row outside hitter drops back to pass, making sure they stay in front of the libero.

When in position 5, the setter starts around the middle front of the court and is careful not to move in front of the MB or to the right of the back row OH.

The front row OH will drop back to pass alongside the back row OH.

An alternative here is to stack both the MB and OH in the middle left corner of the court, taking the OH out of the passing lineup and having the opposite step back to pass.

Again the only real benefit here is being able to control who’s in your passing lineup.

The setter has now moved into the front court and in this rotation stacks with the MB in the front left corner of the court, allowing the OH to drop all the way back from the front right to pass in the back left zone.

The setter will have to sprint across the court to get into position to set as soon as the ball is served.

The opposite mirrors the setter here and starts in the back right corner of the court. They’re careful to stay behind and to the right of everyone.

We now have only 2 front row attackers: the outside and the MB.

In the second last rotation, the setter starts right where we want them to be, the OH drops back to pass, and the OPP is pushed out of the passing lineup.

In the final rotation, the setter is already in their base position and the OH simply has to drop back to pass as usual.

The OPP has to stay to the left of the OH and will swing around to the right hand side of the court to hit from the back row.

After this rotation we’re right back to where we started from!

I’ve created a printable volleyball 5-1 rotation sheet which is just a double page PDF that contains the above diagrams.

How Do You Coach The 5-1 Volleyball Rotation?

The easiest way to teach the 5-1 rotation is to get your players on the court and simply walk them through each of the above rotations.

I was never explicitly taught how this rotation works, but just gradually picked it up after enough exposure to it on court.

You could probably teach the entire 5-1 rotation in just 1 training session simply by slowly walking through it repeatedly for 30 minutes.

Below are some commonly asked questions I thought I’d take the time to answer.

It’s called a 5-1 rotation because there’s 1 setter and 5 attackers.

When using a libero of course it’s not quite going to be 5 attackers, but you get the idea.

What is the difference between 4-2 and 5-1 in volleyball?

A 4-2 rotation has 2 setters who set only from the front court.

A 5-1 rotation has 1 setter who sets the whole way around (back court and front court).

Is there a libero in the 5-1 rotation?

Yes, a libero will almost always come on to replace the middle blocker in the back court.

Teams don’t need to use a libero and can choose to keep their MB on the court to play through the back row, but it’s extremely uncommon.

Do college volleyball teams run a 5-1?

Yes. In fact the 5-1 rotation is the most popular choice for college level teams as well as professional and international level competition.

This is mainly because players at this level are more competent when it comes to attacking from the back row, which means there’s always plenty of offensive options even when the setter is front row with just 2 other front row attackers.

You had better hope your setter can jump!

Since the setter plays all the way around in the 5-1 rotation, they’ll have to block and should ideally be something of an offensive threat.

If you have another setter on your team who is taller, you could sub them on to set in the front court for your shorter setter, and have the short setter set only from the back court.