How To Run A 6-2 Volleyball Rotation (Full Guide) 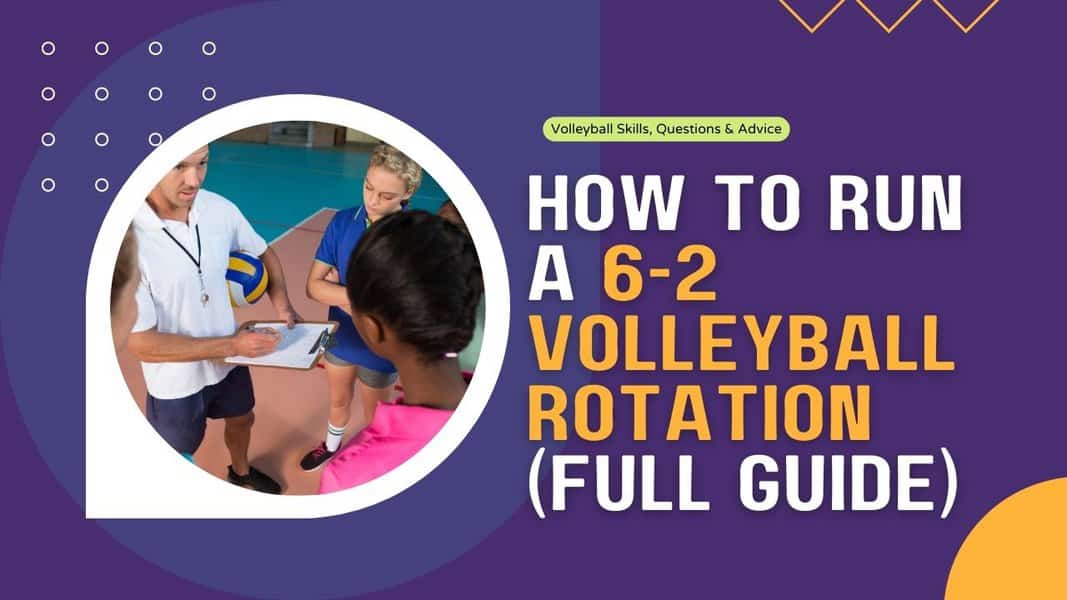 The 6-2 volleyball rotation is among the most popular offensive strategies in volleyball.

This strategy involves using 2 setters who set from the back row only, which maximizes the total number of attackers we can have on court (6).

It’s not uncommon to see this approach taken by teams at all levels of the game, although it’s certainly more prevalent in junior volleyball and less common at the highest level of the game.

In today’s article we’re going to take a look at exactly how this formation works as well as discuss why you might choose this strategy over something like a 5-1 rotation, 4-2 rotation, or even a 5-2 rotation.

Advantages Of A 6-2 Rotation

First of all, why might you choose to run a 6-2 rotation? What are the primary benefits of using this approach over another?

You’ll Always Have 3 Hitters In The Front Row

In a 6-2 rotation, the setters play only in the back row.

What this means is that we will always have an outside hitter, middle hitter, and a right side hitter ready to attack from the front row.

This maximizes our offensive firepower and is ideal for teams who have lots of really strong hitters.

The 6-2 Rotation Is Very Simple To Learn

The way this rotation works means that there’s only 3 different serve receive formations players need to be familiar with.

Once you learn where to stand on court for those 3 rotations, it becomes a very simple offense to run.

If you have setters on your team who are also a fantastic hitters, in the 6-2 formation they can set from the back row and hit from the front row, maximizing the use of their talent.

In most cases the setter will be subbed off for an opposite hitter (right side), so it’s pretty uncommon to see a setter play the whole way around the court in a 6-2.

6-2 Is Good For Teams With Short Setters

If your team has shorter setters, the 6-2 rotation will probably be your best option.

Since the setters are only ever playing from the back row, they’re not going to be attacking or blocking in the front row, so their height won’t be as much of a liability.

This is a nice perk for younger or more social teams where you’re trying to give everyone a decent amount of playing time.

Since the setters only play from the back row, you can sub them out for dedicated right side hitters when they reach the front row, allowing more players to take to the court throughout a match.

Disadvantages Of A 6-2 Rotation

The 6-2 rotation definitely isn’t perfect and certainly has its limitations.

These limitations are why we tend not to see 6-2 being used as often as the 5-1 rotation at the highest levels of volleyball.

The Setter Can’t Attack In A 6-2 Rotation

Since the setter is in the back row, they’re unable to attack the ball which means they don’t have tools like the setter dump at their disposal.

When the setter isn’t an offensive threat, it makes the opposition blockers’ jobs much easier as they can focus on reading the hitters.

If you have a really tall and athletic setter, it’s a bit of a pity for them not to be an offensive weapon.

In The 6-2 Rotation, It’s Harder For The Setter To Transition

When the setter is in the back row, they have to play defense in position 1 which is further from their base position than if they were blocking on the net in position 2.

This means the setter is going to be digging more balls defensively, which means they’ll be unable to set the second ball as often as they’d be able to if they were in the front row.

If you have a libero who is really excellent at setting, this effect will be somewhat negated as they can step in and take those second balls when the setter is out.

If the setter is in the front row, they’re basically going to be standing in their base position the whole time, which makes the offense run a little smoother.

Having Multiple Setters Can Be Jarring

The setter is the primary leader on court. They are essentially running the show.

They know which hitters are hot, where the tough matchups are, and what approach to take.

When you’re switching setter every 3 rotations, as you do in the 6-2 rotation, it’s somewhat jarring and can break the momentum/chemistry of previous setter/hitter partnerships.

At the highest level of the game, entire teams are built around 1 particular super talented setter, so ideally you’ll want to keep that asset on the court as much as possible.

If you’re running a 6-2 formation, you’re only getting the most out of your stud setter half the time.

You really need 2 equally talented setters for it to be a worthwhile option.

Note that the right side player (RS) is our second setter who, once they rotate into position 1, will become the active setter.

At the same time, the initial setter (S) will switch to a right side hitter as they enter the front row (position 4).

Also note that in most cases, when a setter rotates into position 4, unless they are a talented spiker, they’ll probably be subbed off for an opposite hitter (AKA right side hitter).

While the above approach is more common, an alternative formation you might see is as below.

This approach sees the MB and RS stack on the left side of the court and the front row OH is then able to drop all the way back to pass alongside the other OH.

I’d choose this approach over the initial one if either your OH or RS struggle hitting from the opposite wing, or if there’s a very favorable match up for the OH on the left side of the court.

When the setter is in position 6, they push up as close to their base position as possible and the outside hitter (who is now front court) drops back to pass.

The RS must stay in front of the setter until the ball is served.

In the final rotation, the setter will start around the front middle of the court, being careful to stay to the left of the back row OH.

There is also an alternative approach to this final rotation you should know about.

In the alternative approach, the right side hitter drops back to pass while the front row OH stacks up close to the 10 foot line with the setter.

This might be a better approach when your RS is a better passer than your front row OH.

At this point, since the setter was just in position 5, they’re about to rotate into the front row and the RS is now rotating into the back row .

The setter entering the front row now becomes the right side hitter and the RS in the back row is now the setter.

As I mentioned earlier, as the setter rotates into the front court, they’ll often be subbed off for an opposite hitter, someone who specializes in attacking from the right side of the court.

We are now effectively back to where we began in the first rotation diagram where the setter is in position 1.

This is one of the most attractive things about the 6-2 rotation: you only have to learn 3 different serve receive formations!

I wouldn’t worry too much about the alternative approaches to rotations 1 and 3, since they can be a little confusing to some and aren’t really necessary.

But it’s still good to know about them in case you find yourself on a team one day where they’re doing things a little differently.

I’ve created a printable volleyball 6-2 rotation sheet which is just a single page PDF that contains the above diagrams.

How Do You Coach The 6-2 Volleyball Rotation?

The easiest way to teach the 6-2 rotation is to get your players on the court and simply walk them through each of the above rotations.

I was never explicitly taught how this rotation works, but just gradually picked it up after enough exposure to it on court.

You could probably teach the entire 6-2 rotation in just 1 training session simply by slowly walking through it repeatedly for 30 minutes.

Below are some commonly asked questions I thought I’d take the time to answer.

It’s called a 6-2 rotation because there’s 6 attackers and 2 setters in total (not on the court at once, obviously).

By 6 attackers we’re talking about the 4 other players on the court (who aren’t setters) plus when the setters rotate into the front court, they become attackers. So it’s 4 + 2 part time attackers (when they’re not setting) = 6.

Yeah, the libero isn’t really an attacker so it’s not entirely accurate, but that’s the idea at least.

What is the difference between 4-2 and 6-2 in volleyball?

The main difference between the 4-2 and 6-2 rotations is that there’s still 2 setters, but they always set from the front row which means there’s only 4 other available attackers.

It’s the opposite to the 6-2 system where the 2 setters set exclusively from the back row.

Is there a libero in the 6-2 rotation?

Yes, a libero will almost always come on to replace the middle blocker in the back court.

Teams don’t need to use a libero and can choose to keep their MB on the court to play through the back row, but it’s extremely uncommon.

Do college volleyball teams run a 6-2?

Yes, volleyball teams at all levels of the game run the 6-2 system, however it’s less common at the collegiate level and higher.

This is because the necessity for 3 front row attackers isn’t as high in higher level games, as teams will have more competent back row offensive options, such that they’ll benefit more from having a front row setter.

The 6-2 rotation is far more common in high school and junior volleyball.