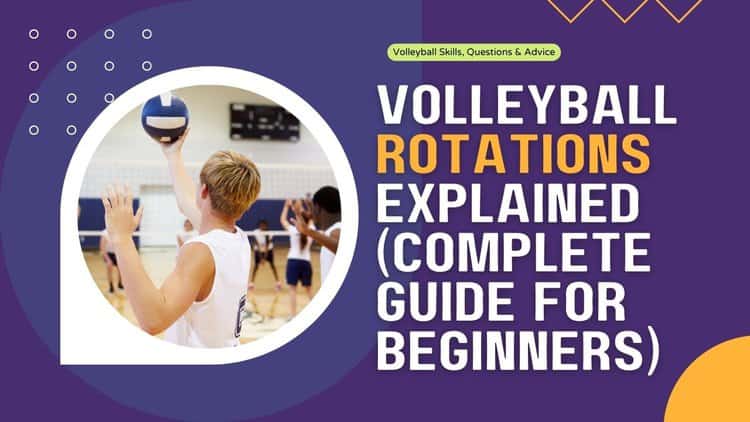 When you’re still fairly new to volleyball, understanding how rotations work can be a little confusing at first…

It’s not quite as simple as “everyone moves around one position” each point and there’s a fair bit more to it.

But don’t worry, I’ve got your back…

I promise all of your questions will be answered and you’ll have this stuff down within the next few minutes!

How Do Volleyball Rotations Work?

The first thing you’ve got to understand when it comes to rotations is how to physically move around the volleyball court.

Whenever the other team is serving, if your team manages to win the point, each player on your team will rotate 1 position clockwise.

We often refer to each of these ‘positions’ as ‘zones on court’ and we use a numbering system (1-6).

Note that when I say positions here, I’m referring to these zones on court or their numbers, not the player positions such as setter, libero, outside hitter, etc.

We’ll get to that stuff later on.

There’s a few different rules you need to be aware of so your team isn’t called for any rotational violations.

The main thing you need to be aware of is the ‘overlap rule’.

This refers to your proximity to other players before the ball is served.

After the ball is served, you can move anywhere on the court, but it’s important to follow the overlap rule before the serve.

The rule states that you’re not allowed to ‘overlap’ with the player directly in front of or behind you, or to your direct left or right.

To make it crystal clear,

Okay, seems fairly simple? So where does it get tricky?

When you’re about to receive a serve, you’ll want to shift your players around the court such that your best passers are in the best positions to pass and your setter is already close to the net so that they can set the second ball.

Below is an example of a serve receive formation your team might use.

As you can see, none of the players are breaking the overlap rule as indicated by the green animation.

The player in position 4 has dropped back off the net and is now standing where 5 was.

The players in 5 and 6 moved over to the right to make room for 4 to pass.

The player who started in 1 (the setter) has pushed right up onto the net and is standing directly behind the player in 2.

The player in 3 hasn’t really moved much.

Now our team is ready to receive serve: we’ve got 3 strong passers in the back row, and our setter is right up near the net which is where they want to set from.

The Overlap Rule Applies To The Serving Team Too

Even when your team’s serving, you’ve still got to respect the overlap rule.

As soon as the ball is contacted during serve, the players on the serving team will run to their base positions.

After Serving, The Defending Team’s Players Move To Their Base Positions

The base positions are the locations on court that each different player type (setter, outside, middle, libero, opposite) will look to defend against an attack from.

In the above clip, you’ll notice players on the serving team were respecting the overlap rule initially and then the instant the ball was served, they overlapped with one another and moved into their base positions.

As soon as the ball was served,

All players are now in their base positions, ready to defend.

Player Positions Must Mirror Each Other

On the volleyball court we usually have 2 outside hitters, 2 middle blockers, a setter, and an opposite hitter.

At all times each middle blocker must be directly opposite each other, as must the outside hitters.

The setter and opposite hitter must also be opposite one another.

Your coach can choose to start a set with players in any position on court (1-6), so long as the relative positions are mirrored.

The Libero Can Rotate In & Out At Will

Usually when the middle blocker rotates into the back court, after they’ve served and the point is lost, the libero will come on to replace them.

The libero can replace any back court player during dead play and doesn’t need to formally ‘sub in’ via the second referee as other players have to.

In addition to how we move around the court, the word ‘rotation’ can also refer to an offensive strategy used by a volleyball team.

Each strategy differs slightly based on whether the setter will play in the front row or back row, as well as how many different setters will be used in total.

Each strategy has its own unique set of benefits and drawbacks.

The 4-2 volleyball rotation is the simplest strategy and is ideal for beginners.

This rotation involves using 2 setters who set from the front row.

This is the first rotation I used when I started playing volleyball in high school at age 13.

The 6-2 volleyball rotation is another fairly common strategy used primarily by intermediate teams.

It’s characterized by having 2 setters who set only from the back row which allows teams to maximize offensive options.

The 5-1 volleyball rotation is a more advanced strategy which is most common at higher levels of volleyball.

This strategy involves using a single setter who rotates all the way around the court, playing in both the front court and the back court.

The 5-2 volleyball rotation is a lesser known approach which is somewhat of a hybrid between a 6-2 and 5-1 strategy.

For younger teams with players aged between 10-14, it’s quite common to see teams use a 4-2 rotation.

This is the most basic strategy to learn and allows players who are still learning the rules to simply enjoy the game of volleyball, without having to worry about complex rotational stuff like the overlap rule.

As players develop, it’s quite common to see teams switch to a 6-2 rotation.

This is a really good option for high school teams because it allows for the maximum number of front row attackers (3).

Since high school players around the age of 12-15 likely haven’t developed the ability to consistently spike from the back row, implementing a 5-1 rotation may limit your team offensively unless you have a super tall and smart setter.

For varsity volleyball teams, either a 6-2 or 5-1 rotation will work best, depending on the composition of your team and skill level.

How To Memorize Volleyball Rotations?

Knowing exactly where to stand on the volleyball court during serve receive can be confusing at times and it’s easy for younger players to lose track of where they should be on court.

I’ve written detailed guides for each of the major rotations (linked to above) in which I’ve included downloadable PDFs that show the rotational diagrams for each system.

I recommend studying the rotation diagrams until you understand why each player stands where they do on the court, so that they’re obeying the rules of rotation.

Start out by learning the 6-2 rotation as it’s fairly simple, with only 3 different serve receive formations to memorize.

The more volleyball you play, the more familiar you’ll become with these rotations and eventually it’ll become second nature.

If you get lost, your team mates will usually be able to help you find where you need to be on court.

If you’re really struggling with rotations, ask your coach to walk your team through them slowly, simulating a game situation.

This is also a great way to practice switching from serve receive to base positions.

What is the easiest volleyball rotation?

What happens if you’re called out of rotation?

If your team is out of rotation, meaning you’re not obeying the overlap rule, the point will be awarded to the opposition team and you’ll have to fix the issue.

It’s usually a fairly quick fix and your coach should be able to help players find where they need to be standing.

All volleyball players, at every level of the game, rotate every time they sideout.

How does a libero rotate?

While on the court, the libero rotates in the same way anyone else does.

When they’re about to rotate into the front court (position 4) they’ll switch out with the middle blocker who will play the next 3 rotations.

After the MB has served and the point is lost, the libero will come back on and play the remaining back court rotations.

The libero doesn’t have to make a formal substitution to enter or exit the court.