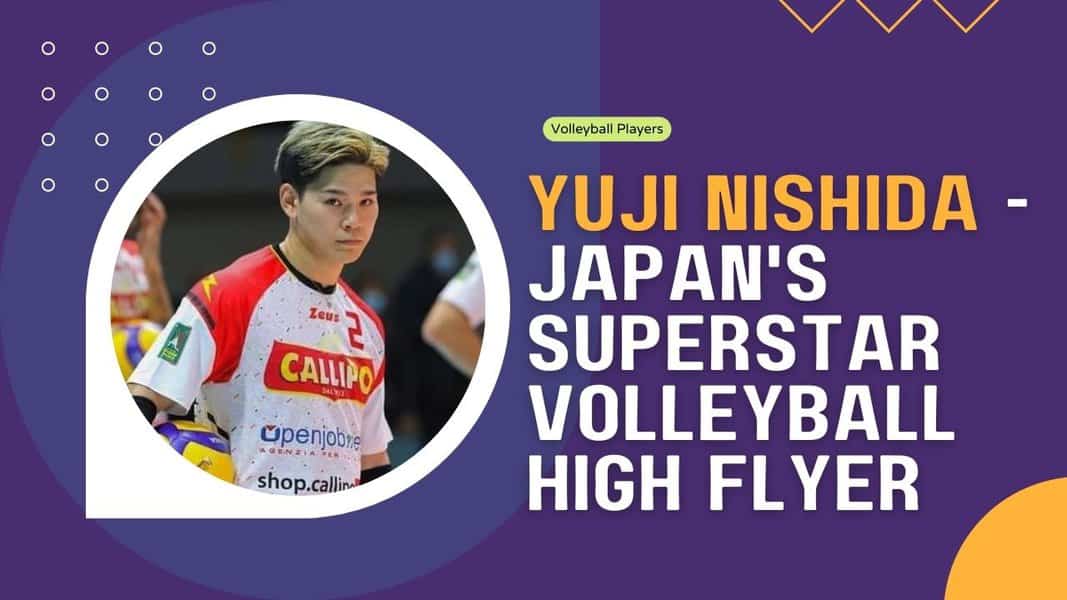 Japanese men’s volleyball hot shot, Yuji Nishida, has seen a swift rise to fame within the volleyball world over the last few years.

Known for his incredible jumping ability and powerful spiking, Nishida’s Japanese fan base have likened him to a real-life Haikyuu character, as the hyper popular anime series has spawned millions of new volleyball fans.

In this article I’m going to do my best to answer all of your most pressing questions about Japan’s golden child, Yuji Nishida.

Yuji Nishida Facts You Need To Know About

We’ll start off with some fairly basic biographical information to give you a better sense of who Yuji is and we’ll dive into the volleyball topics shortly.

How Old Is Yuji Nishida?

Nishida plays with the skill and experience of a player 5-10 years his senior, so to see such a talent at such a young age is really incredible.

Nishida is 186cm (6’1″) tall, which is really short for a professional volleyball player…

The average height of an Olympic opposite hitter (Yuji’s position) is 2.05m or 6’8.5″ which is part of the reason why Nishida is so exciting to watch.

He’s way, way shorter than his opponents yet is still able to compete due to his impressive vertical jump.

What Is Yuji Nishida’s Vertical Jump?

That is exceptionally high.

We don’t know this figure is for certain because his standing reach height isn’t public, but we do know that he has a 348cm spike height according to his Volleybox profile.

Some believe his vertical may be higher (and some say lower) than 41″, but it’s definitely somewhere around that point.

Regardless of the number, his jumping technique is absolutely textbook and it’s a thing of beauty.

Be sure to check out my full article discussing the highest vertical jumps in volleyball!

What Is Yuji Nishida’s Salary?

This is a very difficult question to answer because none of his contract information is public.

After leaving Italian club Callipo to return to Japan to play for the JTEKT Stings this year, it’s quite difficult to say how much a player like Nishida will be earning, especially since we have to factor in his Asics sponsorship.

I would estimate Yuji’s Stings contract would be somewhere between $100k – $300k this season based on the factors I discuss in my professional volleyball player salary article.

I could be way off on that and there’s a chance it’s quite a bit higher, but I seriously doubt it’s less than $100k.

He’s also one of the few Asics sponsored volleyball athletes and we have absolutely no clue how much that contract is worth.

So my conservative estimate for Nishida’s salary is somewhere around $225k and it could well be north of $1m.

What Is Yuji Nishida’s Net Worth?

Again the range of estimates here varies quite a bit.

Remember Yuji is only 22 years old. He played 4 seasons for the Stings before shipping off to Italy for a season and now he’s back playing for the Stings.

I doubt he would have made a ton of money during his first 4 seasons, but probably got paid reasonably well in Italy and is certainly being looked after now, especially with that Asics sponsorship.

I’d estimate Yuji Nishida’s net worth to be anywhere from $1-$3m.

Let’s take a closer look at Nishida as a professional volleyball player.

What Team Does Yuji Nishida Play For?

Currently Yuji plays for the Jeitekuto Stings in Kariya, in Japan’s V.League.

Prior to this season he played for Callipo in the Italian second division league.

Before his season in Italy, he played 4 seasons for the Stings, so he’s recently returned to the team he started his pro career in.

He of course also plays for Japan’s national team.

What Position Does Yuji Nishida Play?

Yuji Nishida plays the position of opposite hitter.

He’s well known for his incredible jump serve and has racked up no shortage of ‘best server’ awards over the years.

It’s an awesome sponsorship for Yuji because he gets paid to wear the what I believe are the greatest volleyball shoes ever created!

Yuji Nishida Jersey – Where Can I Get One?

As far as actual volleyball jerseys go, I’ve yet to find any quality retailers when it comes to Yuji Nishida jerseys.

There’s plenty of other really awesome designs worth taking a look at too if you’re a Nishida fan!

Although Nishida is probably a super springy guy naturally, his vertical jump appears to have been earned at least in part by working out in the gym.

When questioned about the key to his jumping ability, Nishida said that it all has to do with the speed of his approach.

You can take a closer look at Nishida’s training in the gym in the below video.

Yuji Nishida’s Calves – What Everyone REALLY Wants To Know About…

One of the most searched phrases I came across when researching this article was “Yuji Nishida Calves” and so it seems at least some of you are obsessed with this man’s legs!

Does Yuji secretly have bionic calves? Is this why he can jump so high?

It doesn’t appear so as his legs look fairly similar to what you’d expect for an athlete who gets paid to jump really high.

I’ll keep tabs on Yuji’s calves as his career develops!