Volleyball Setter Dump: Everything You Need To Know 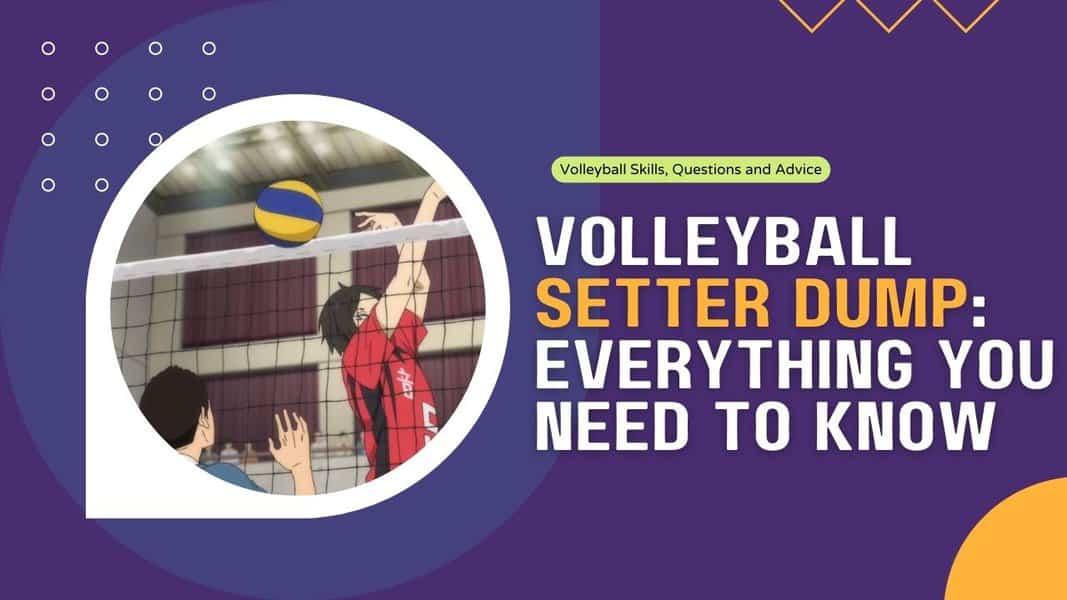 The ‘dump’ can be an extremely useful tool to have in your arsenal as a setter.

It’s one of the few ways a setter can, instead of facilitating the offense, take it into their own hands and actually earn a kill for their team.

A well executed setter dump is virtually impossible to defend against and is extremely frustrating to deal with as an opposition defender.

In this article we’ll go over exactly what a setter dump is, what the rules of this play are, how and when to do a setter dump, as well as how to defend against it.

What Is A Setter Dump In Volleyball?

A setter dump is an attack made by the setter on the second ball which resembles ‘dumping’ the ball over the net as opposed to setting up a spiker.

A well executed setter dump should be deceptive and difficult to predict or defend.

Above we have one of the top 5 setters in the world, Simone Giannelli, performing a textbook setter dump.

You’ll notice that it appears as though he’s going to set the ball right up until the last moment where he decides to ‘dump’ the ball across the net himself with his left hand.

The vast majority of setter dumps will look like the above, but occasionally you’ll see a setter dump the ball across the net with their right hand, usually into position 4.

What Are The Setter Dump Rules?

There’s really only 1 important rule to remember when it comes to the setter dump: the setter must be in the front court.

Since the dump is classified as an attack on the ball, a back court setter isn’t allowed to perform this action.

They must also be mindful not to ‘carry’ the ball when performing a dump. This refers to extended contact with the ball.

Since the setter isn’t exactly spiking the ball when dumping and are effectively ‘guiding’ or ‘swiping’ the ball down, there’s a slight risk of being called for a carry with this move.

Setter dumps are perfectly legal so long as the setter is in the front court and contacts the ball cleanly.

Can A Back Row Setter Dump?

A back row setter is not allowed to perform a setter dump as this is classified as an attack on the ball which is prohibited from players in the back court.

Back Row Setters: Use The Setover Instead

Back row setters, while they’re not allowed to dump the ball, have other similar options they can use, such as the setover.

This is another deceptive second ball move that is similar to the dump, except it’s simply the setter choosing to set a low and quick ball directly over the net into an open space.

Is The Setter Dump An Option In The 6-2 Rotation?

In a 6-2 rotation, the setter will be in the back court which means the setter dump is off limits.

Can Someone Besides The Setter Dump?

Technically, there’s no rule that states someone other than the setter can dump the ball, so long as they’re in the front row.

Having said that, it’s called a setter dump for a reason so it’s kind of by definition an ‘in system’ play, meaning it really only makes sense if the second ball goes to the setter.

It’s hard to imagine a scenario in which the second ball could go to a player other than the setter, who also happens to be in position (i.e. very close to the net) to dump the ball.

Can A Spiker Do A Setter Dump?

Again, technically this is possible but I can’t see how it would happen.

A team would probably have to set up some sort of a ‘trick play’ where instead of the designated setter receiving the second ball, they switch with a spiker who acts as the setter while the setter transitions out on offense.

In this case, the spiker could do a setter dump.

Under normal circumstances, if the second ball ends up going to a spiker, it’s usually an ‘out of system’ scenario and, since the spiker has transitioned out to hit the ball, they won’t really be close enough to the net to perform a dump.

Can A Libero Do A Setter Dump?

Since a libero is a back court player, they’re not allowed to do a setter dump.

How To Do A Setter Dump

The setter dump is not a particularly difficult move to pull off in terms of technique. Most of the difficulty comes in knowing when it’s a good time to do it.

1. Ensure You’re In The Front Court

To perform a setter dump, you of course have to be in the front row and you need to be able to jump set.

2. Make Sure The Pass Is Tight But Not Too Tight!

You’re looking for a pass or dig which is on the tighter side, but not quite an overpass. If it’s really tight to the net, the opposition middle blocker will look to block or joust the overpass, which will interfere with our setter dump.

So it has to be tight, but not too tight.

3. Approach To Set, But Dump Instead

As the ball is coming in, go up to jump set the ball as you normally would but at the last moment, simply push the ball down across the net with your left hand.

You’re aiming for a relatively empty piece of court just behind or beside the blockers, usually within the 3 meter line.

Inexperienced setters will push the ball too flat or deep into the court, giving the defenders an opportunity to dig it.

You want the ball going straight down and as close to the net on the other side of the court as possible, making it harder to reach for opposing defenders.

Right up until the last moment, it should be impossible to tell you’re going to dump the ball.

A lot of inexperienced setters will telegraph their intention to dump the ball far too early.

They usually do this by lowering one of their arms far too quickly – when you do this it becomes impossible for you to set the ball now, and obvious you’re looking to dump it.

Great setters will make it impossible for blockers and defenders to know whether they’re going to set a spiker or dump the ball themselves.

Can A Setter Dump With Two Hands?

A setter can absolutely dump with 2 hands, although it’s usually more obvious to defenders that a dump is coming.

Note this isn’t the same as a setover and would still be classified as a dump/dunk.

Here’s another textbook example of a setover (not a dump) coming from my former teammate, Arash Dosasnjh.

When Should A Setter Dump?

Knowing when to dump is the hardest part of performing this move.

We’ve already established that the pass or dig needs to be relatively tight, but not too tight that the blockers involve themselves immediately.

A setter should also always have a reason for dumping and shouldn’t just do it randomly.

Strong setters will be constantly surveying the other side of the court out of their right eye.

They’re looking for blockers who aren’t in the ready position or are committing to early, as well as large patches of empty court.

To be honest, a lot of this just comes down to pure intuition and experience. The more dumps you make, the better you get at it!

How Do You Defend Against A Setter Dump?

As a middle blocker, I am probably not the right person to be answering this question!

Since a good setter dump is very well disguised, defenders in the back court have very little time to react and make a dig.

When defending against dumps, the 2 things defenders should be thinking about are:

If a defender has identified that the opposition setter is in the front court, they can move forward slightly so their base position is a little closer to that attack line.

This will help them defend against dumps as they’ll be closer to the area on court where most dumps end up.

By knowing at all times where that patch of court most likely to be dumped into is, defenders can react almost without even thinking.

Defenders also need to be able and willing to dive in order to properly defend against dumps and tips.

Diving is not an easy skill to learn but is one that’ll make you a significantly better defender once you get the hang of it.

Can You Setter Dump In Beach Volleyball?

You most definitely cannot perform a setter dump in beach volleyball.

With significantly stricter rules on what constitutes a double/carry in beach, the dump is off limits.

Essentially a dump is just a tip, which isn’t allowed in beach volleyball.

The closest you’d get to a setter dump in beach would be a setter ‘dink’ which would involve knuckling the ball on the second contact.

While this does happen, it’s not as effective as an indoor setter dump since it’s very difficult to control dinks especially when there’s a blocker involved.

For those of you following the Haikyuu volleyball anime, you’ll probably have noticed a number of setter dumps.

Let’s briefly run through and analyze some of the more notable plays.

When Karasuno plays against Inarizaki High in ‘To The Top’ season 2, we see Karasuno’s starting setter, Kageyama, pull off an excellently timed setter dump.

This was a smart play because of how unexpected it was during a tense moment of the game.

One of the most talented setters in the series, Kenma Kozume is known for his frequent use of the setter dump.

Interestingly, in the above clip, you’ll notice Kenma is dumping the ball with his right hand, which means he facing the wrong way on the court…

This is most likely an oversight by the animators as it’s very rare for a setter to be facing the right side of the court.

Keiji Akaashi of the Fukurōdani Academy has also managed some decent setter dumps in the anime.

Both Kageyama and Tsukishima were caught completely off guard with this brilliantly placed dump.

Oikawa gets probably the cleanest dump of all by finding a very poorly defended open piece of court to go after.

The camera angle should be impossible/blocked by the back/left defender who would should realistically have made an attempt to dig this dump!