How Tall Are Opposite Hitters In Volleyball? 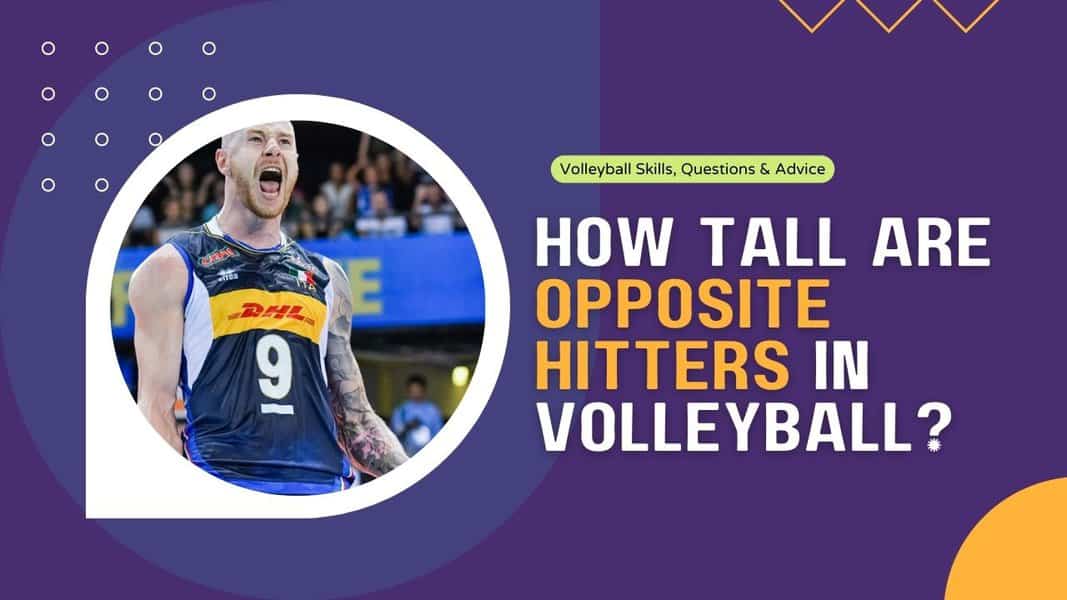 Opposite hitters are usually the second tallest position on the volleyball court, behind the middle blocker.

However in some cases, as is the case with Russia’s Dmitriy Muserskiy or Australia’s Thomas Edgar, the opposite hitter will be the tallest player on the team!

So exactly how important is height to an opposite hitter?

Let’s take a look at the averages for various levels of the game, as well as some things you can do if you’re a vertically challenged opposite.

What’s The Average Height Of An Opposite Hitter?

Of course this number varies a fair bit based on gender and whether we’re talking about college or professional volleyball.

Average Height Of A Opposite Hitter Vs Other Positions

On average, the opposite hitter will be the second tallest player on court.

They’re usually only slightly shorter than the middle blockers but quite a bit taller than the outside hitters.

What this shows is that opposite hitters were on average just 1cm (0.4″) shorter than the middle blockers, but 8cm (3″) taller than the outside hitters.

This pattern of ‘slightly shorter than the middle but a lot taller than the outside’ seems to hold pretty true throughout the world, at least at the highest level of the game.

There are always exceptions, however. It’s possible to have a really tall outside who is taller than the opposite, although it’s not particularly common.

We also occasionally see massive opposites, especially in the Asian leagues where teams recruit the biggest, tallest, most dominant athletes they can afford.

Quite often they’ll dwarf whoever the middle blocker is on their team.

Average Opposite Hitter Height In The Olympics

At the highest level of the game, opposite hitters seem to be holding steady in height at around the 205cm mark.

The average height of an Olympic men’s volleyball opposite hitter is 204.5cm or 6’8.5″.

This is based on the height data from the 2012 Olympics as well as some numbers from the 2020 Olympic rosters.

Below we’ve got the average height for men’s college volleyball opposite hitters as per the NCSA website.2https://www.ncsasports.org/mens-volleyball/recruiting-guidelines

How Important Is Height For An Opposite Hitter?

Exactly how tall does a opposite hitter really have to be?

The answer is… really tall!

There are a couple of reasons for this.

Opposites Need To Block The Outside Hitter

When we think of outside or left side hitters, we think of very technically capable and strong spikers.

The right side/opposite is matched up with the other team’s outside/left side, which means we want as big of a block as we can to shut down this offensive weapon.

Height usually correlates very strongly with block height, so it makes sense to have our strongest blocker matched up against the other team’s strongest hitter.

If we switch around to the other side of the court, our outside hitter will be matched up against the opposing team’s opposite, who will often be in the back row.

Since the opposite often has to hit the D ball from the back row, they should be easier to block which means we can put a shorter player (outside hitter) in front of them.

Hitting from the right side means you also need to be able to hit the D ball.

Being able to hit a back row spike around a double (and sometimes triple) block is really hard.

Being taller means you’re likely to have some extra spike height which means you’ll be able to contact the ball at a higher point and should have better success hitting these back row attacks.

How Tall Do I Need To Be To Play Opposite Hitter?

If you’re aspiring to be a successful men’s opposite hitter, you’re going to want to be at least 6’6″ (198cm), in my opinion.

Even at that height, you’re going to be about 7cm shorter than most players in your position, so you’d better have some serious skills!

Really we’re more interested in block height and spike height than we are actual height.

At the end of the day, your job as an opposite is to block and to spike.

Japan’s Yuji Nishida is an 187cm (barely 6’2″) opposite hitter but he has an incredible vertical jump and still has a 350cm spike reach.

This gives him the ability to hit that back row ball around the block and he’s still highly dangerous despite his height.

For women, you’re realistically looking at being a minimum of 5’10” or more.3https://www.athleticscholarships.net/volleyballscholarships.htm

These numbers are super general and the same thing regarding vertical jump applies.

How To Succeed As A Short Opposite Hitter

Perhaps you’re not the tallest player but you’ve got an epic left handed arm swing and really want to play in the role of opposite.

Let’s take a quick look at some things you can do to maximize your likelihood of succeeding as a shorter opposite hitter.

I know you’re probably not thrilled with this answer, but chances are if you’re too short to be an opposite, you might be better suited as an outside hitter.

What I’ve come to learn is that success, in any endeavor, isn’t so much to do with how hard you row, but rather what boat you’re in.

A 6’5″ men’s volleyball player is going to be more likely to succeed as an outside than they are as an opposite. This is just how the game works.

Whatever height impediment you have will be far less detrimental to you in the role of outside hitter than it will as an opposite, that’s for sure!

This is, by far, the best thing you can do as a not so tall opposite hitter.

Be sure to check out my article on improving your vertical jump for volleyball for some tips on where to start.

Chances are you’re going to have to combine this with an improved vertical jump if you really want to make it in volleyball as a short opposite.

You simply need to be able to kill the ball extremely efficiently.

You need to have a higher hitting percentage than your competition if you want scouts and coaches to take you seriously.

This is going to mean getting a lot more hitting reps in during practice.

If your competition is spiking the ball 200 times a week, find a way to hit the ball 300 times or more per week!

Drag your favorite setter to the court a couple extra times each week and practice hitting every type of shot you’ll have to make in a game.

Becoming an amazingly skillful hitter is a numbers game.

Usually whomever hits the most volleyballs will be the better hitter!

Height is definitely an important component of the opposite hitter position in volleyball.

Many of the tallest players the game has ever seen have been extremely talented opposite hitters.

Volleyball teams simply need their most dominant blockers matched up against the other team’s outside hitter, and this usually requires height.

This position also hits more back row balls than anyone else on court, which again requires a high contact point for the attack to be successful.

Having said all that, it’s not the end of the world if you’re on the shorter side.

We’ve seen some incredibly skillful opposites who weren’t the tallest, but they almost always made up for it with incredible jumping ability.